The thoughts, words and actions of great personalities serve as a rich source of desirable qualities and characteristics that define success in life. Let us draw a leaf of inspiration from their lives and fuel our journey of self-development by imbibing their virtues
Mohandas Gandhi, a name that is revered and respected across geographical boundaries, a fighter who professed and publicised non-violence as a trait of the strong, a persona whose principles, qualities and achievements inspire innumerable lives. Born on October 02, 1869 -Gandhiji was leading a usual life until a strong purpose brought about a phenomenal metamorphosis. A change which eventually translated into a movement that liberated our country from years of slavery. Gandhiji evolved to become the Father of the Nation. This journey of his transformation was fuelled by his plethora of virtues. At the commencement of his 150 th birth anniversary year, let us take a peek into few of his qualities.

Mahatma Gandhi was not born with phenomenal talents or skills that set him apart from others. He was neither a great orator nor had an awe-inspiring personality. Yet, today he is regarded as one of the great persons to have walked on earth. What was the reason for this success? It was his unwavering self-belief. He always believed in himself, his thoughts and principles which led him to remain strong in the face of adversity.

Such was Gandhiji’s strong self-belief that his words and actions convinced others also. When he visited the Northwest Frontier to meet his Pathan supporters, he was dwarfed by their height. They were tall and rugged, and all carried guns. “Are you afraid? Why else would you carry guns?” He asked them. They stared at him, stunned into silence. No one had ever dared to question their courage. “I have no fear,” continued Gandhiji, “That is why I’m unarmed. That is what ahimsa is about.” Seeing Gandhiji’s self-belief and clarity of thought, the leader of the group, Khan Abdul Ghaffar Khan, threw down his gun, and the others followed suit. His faith in himself triggered the faith of millions of Indians in him.

Mahatma Gandhi’s passion for excellence led him to constantly experiment and improve. A lot of his activities were planned endeavours for self-growth. In the introduction to his autobiography, 'The Story of My Experiments with Truth', Gandhiji shares, “I simply want to tell the story of my numerous experiments with truth, and as my life consists of nothing but those experiments, it is true that the story will take the shape of an autobiography. But I shall not mind, if every page of it speaks only of my experiments. I believe, or at any rate flatter myself with the belief, that a connected account of all these experiments will not be without benefit to the reader. My experiments in the political field are now known… But I should certainly like to narrate my experiments in the spiritual field which are known only to myself.”

His passion for continuous experimentation propelled him to achieve self-mastery. Be it with his beliefs, food, habits or actions, Gandhiji constantly evolved based on his experiments and implementation of learning's from them.

When you embark on the journey of experimentation, you are bound to face both success and failure. The key lies in not getting stuck at either result, learning from both and moving ahead. Mahatma Gandhi wasn’t perfect from the beginning. There were times when he too committed mistakes but he always strived to learn from them and rectify his shortcomings.

Once when Gandhiji was in school he had to go for his gymnastics session in the afternoon. He did not have a watch at that time and the cloudy weather conditions deceived him to realise the correct time. He therefore got late for the session. When examining the attendance the next day, the administrator refused to believe his excuse for the same. On the contrary, he was convicted of lying! That deeply pained him and he cried in deep anguish. In his autobiography, Gandhiji writes that it was then when he realised that a man of truth must also be a man of care. He further adds that he learnt from this mistake and ensured that this was the first and last instance of his carelessness in school.

These are few of many distinguished qualities that Mahatma Gandhi’s life has to offer. Let us get inspired and excel on our path of self-development.
by Sarvarpit Kaushal Shah 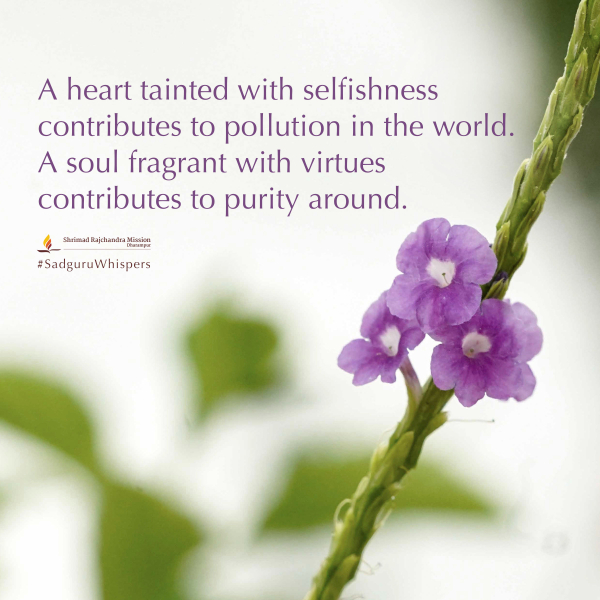 View All
#SadguruWhispers Mindfulness is the base for enlightenment.