Leader of the Mission’s Cherry Hill Centre in USA and an allergy and asthma specialist by profession, Dr. Pareshaben Shah reflects how Pujyashri Gurudev perfectly diagnosed her feeling of emptiness within and prescribed specific ajnas to yoke her to a higher purpose in life.

Those who know me now will have a hard time believing that 8 years ago, I suffered from depression. Externally, there were no obvious reasons for it – I was a successful physician, had a loving family, a lavish lifestyle, expensive vacationing and even spent 2-3 hours a day performing religious rituals. But internally, my world was dull, dry and negative. I carried depression medication with me every day, reluctant to take it.

Prescription 1 – Guru Does Not Merely Give Answers. He Creates a Spiritual Quest Within the Disciple

This went on until June 12, 2005, the day of the glorious pratishtha at our house. This was the first pratishtha performed by Pujyashri Gurudev that I had ever attended. It was an entirely new experience and I didn’t know what to expect. However, the pratishtha became the most magical and transforming event of my life. During the event, I was happy but full of tears, excited but peaceful, singing but silent. I didn’t know what was happening to me then, but now I know. Bapaji had opened the doors of my heart and filled it with His love. While my outer world remained the same, everything changed in my inner world. I had become cheerful and had found a purpose to live for, in a matter of moments. Although I had met Bapaji several times prior to this date, during Pravachans and personal meetings, this was the first time I had fallen in love with the Divine. Now He was constantly in my mind, my heart and in the centre of my life.

Prescription 2 – To Find Eternal Brand of Happiness, Go in the Direction Shown by Your Guru – Turn Within

While the events in my life had led to great happiness, I was confused. I had met my Guru. But now what? How am I going to survive with this long distance relationship? What will I do without Bapaji? I was constantly longing for His physical presence. But, as a Guru does, He read my mind and told me in Phoenix that even if I stay with you for one month, at the end it is going to be the same. Instead, work on raising your level and your Guru will definitely be there in some form or the other. In Toronto too, while addressing the New York – New Jersey Raj Parivar, He looked in my eyes and said that, “The only way to stay constantly with Me is to go within!”

And thus, my inward journey began with His ajna of doing meditation for only two minutes a day in 2002 and evolved to 45 minutes a day as a part of Parnam Diksha in 2010. At first, I never imagined reaching a stage where I could sit in meditation for over ten minutes. But, with His grace, I enjoy my daily meditations and also try to be mindful during activities, which keep me constantly connected to the Divine. Success is inevitable, not because of my efforts, but as a result of His Grace.

Prescription 3 – While Your Guru is Training You, Co-operate with Him by Showing Unswerving Love, Faith and Surrender, and You Shall Experience Peace, Steadiness and Purity

Things were going well. I was strongly connected to Him and was flying high! I thought that having a Guru in my life had filled my glass. Little did I know that meeting a true Guru is not the end of the journey but the beginning. And this realisation came as He began His work. In September 2006, I experienced a downfall. I was miserable and irritable. Each attempt to overcome this downfall resulted in failed efforts. In November 2006, Bapaji visited USA for two and a half weeks. And, as a doctor who constantly monitors a sick patient, He told me that He knew what was going on with me and that I have now become a patient. As the trip carried on, we were together at the Expo Centre in Atlanta, for two days in New York and even for four days in our home. This was with a group of merely ten people. But, as a doctor must feed her patient bitter medicine to help her heal, for most of the trip Bapaji avoided looking at me, talking to me and even turned away when I ran across the Expo Hall just for His darshan. Why? Did He not care for me anymore? My weak mind failed to understand Him.

Externally, my chin was up and there was a smile on my face, but internally I was devastated, confused and silently tearful. I was stressed and was making terrible mistakes, one of which was misplacing Bapaji’s personal paper. As a ‘punishment’ He sent a message that He would not step into our house for the next 5 years. This broke me down completely. I guess He was waiting for this moment. At that time, He made me realise that the reason for my misery was not due to something or someone else but because of my negativities of jealousy, carelessness and ego. His words, powerful and effective, worked like dynamite on my miserable state. The Guru’s ways are so mysterious. He was operating on me so carefully and skilfully. Just like an able surgeon, He stood by my side and worked on me. I must say that throughout, I experienced the undercurrent of His love, and through it all, He always ensured that I kept a sense of security. I realised that He cared for me more than anyone ever did. Also, it later dawned upon me that He had earlier forewarned me about my downfall during Shri Anandghan Chovisi – Shri Shantinath Stavan in Paryushan Parva, 2006. After all, He is the one standing at the top of the hill and able to see so far! This brought faith in me that not only does He love me, but He will go to any extent to pull me up from my downfalls.

Prescription 4 – When the Guru Loves You, He Throws Light on Your Darkest Corners Within, for You to Clean the Dirt You have Gathered. He Does so in Many Ways to Make You Pure

Whether it is a trip to India or His dharmayatra to USA, I have always had a special experience. I would like to share one such experience that occurred during my trip to India in July 2010. Few of the NRIs would gather after lunch on the terrace under Bapaji’s room in Dharampur. There, we would sing and dance for hours. Our eyes were constantly fixed on His room window, expecting His darshan, and even hoping to get prasad. Every time He came to the window, I was very excited. Two days later, He conveyed that singing for your Guru with expectations is not bhakti, but rather, it is like using foul language. I was heartbroken to have committed this mistake.

Yes, I may be full of mistakes but dear Bapaji is passionate about eliminating my darkness. He has the wonderful art of bringing my faults on the surface, making me experience the pain of the faults and then removing them. With each encounter, I have felt purer and closer to Him.

With Bapaji tirelessly working on me, I have definitely seen a change in myself. I have become less judgmental, less argumentative and much less reactive. I am able to accept situations more easily than before. People around have also noticed me being calmer, cheerful and energetic. I cannot attribute these compliments to anyone but Him. Whatever fragrance of goodness is in me is only and only because of Him. I will never be able to thank Bapaji enough!

I know I have a long way to go but I have full faith in my Guru, my super physician who wants nothing but a 100% cure rate for all of my inner ailments. All I need to do is surrender to Him and follow His ajna. Thy will be done!

And thus, even though I am thousands of miles away from Him, this physical distance has never been a barrier for Bapaji to shower His grace on me. Truly, I have felt blessed and privileged. All that I am today and till the end of my spiritual journey is all by His grace! I bow down at the Lotus Feet of my loving, kind, compassionate Guru, Bapaji – the destroyer of my darkness. 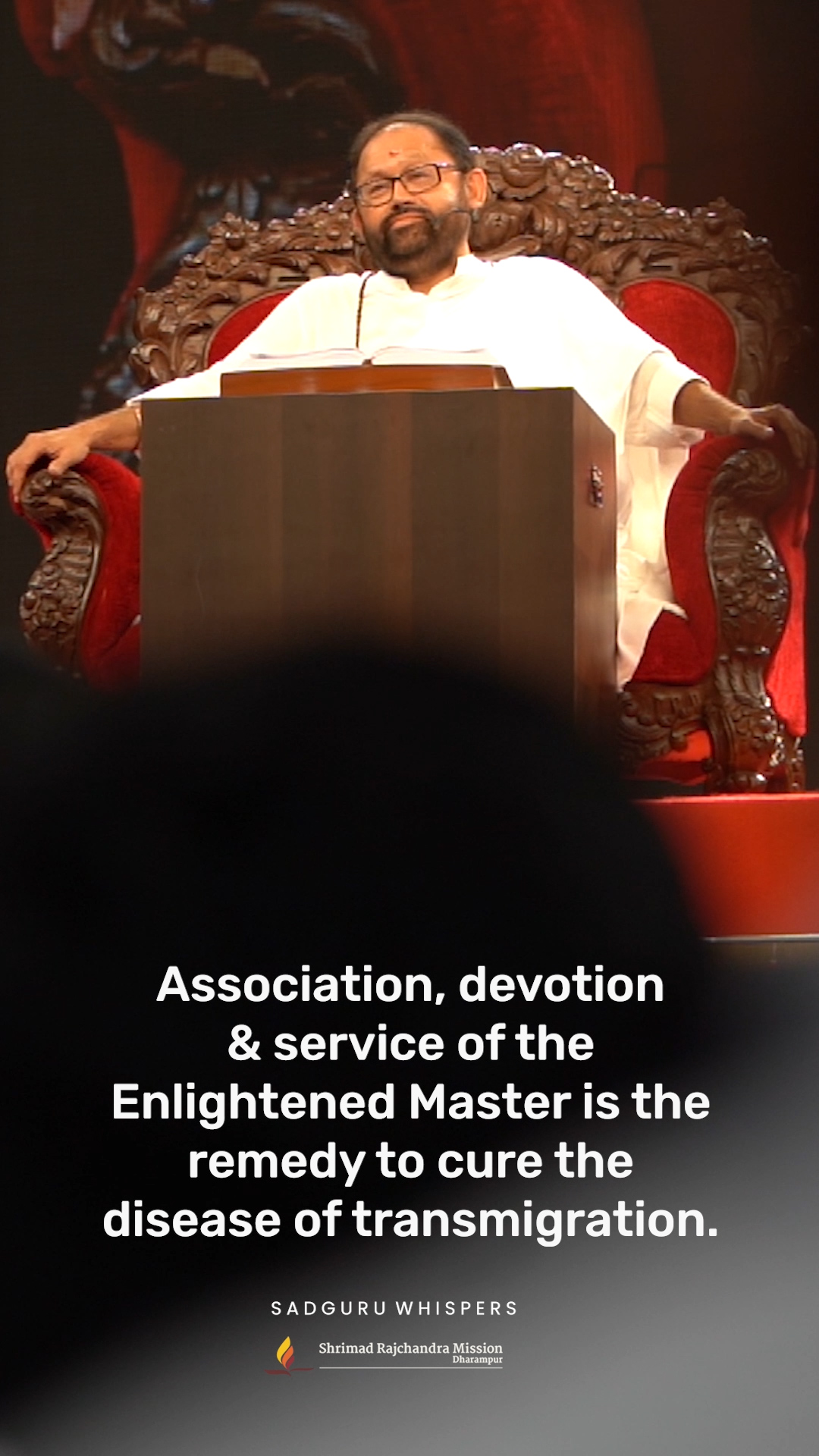 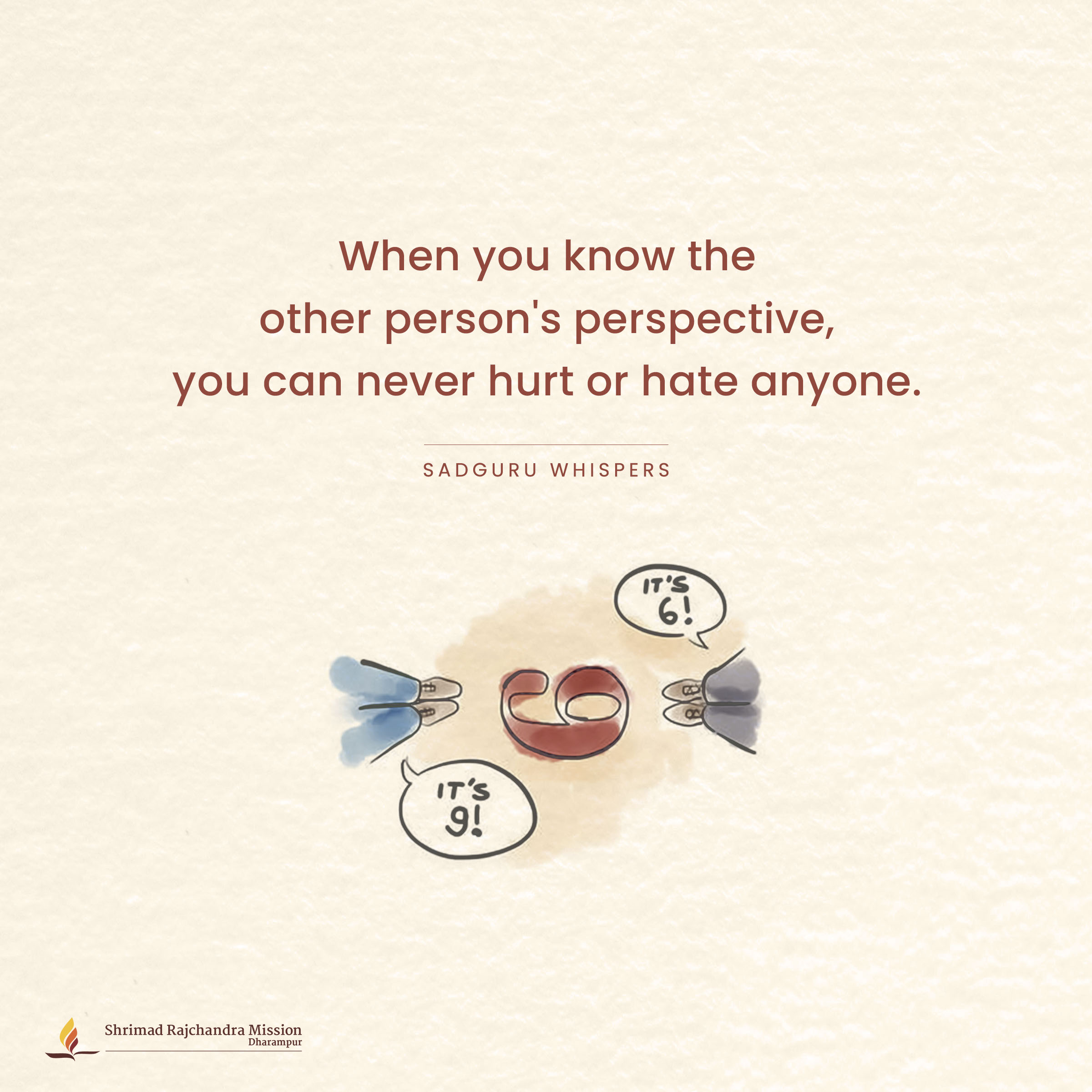 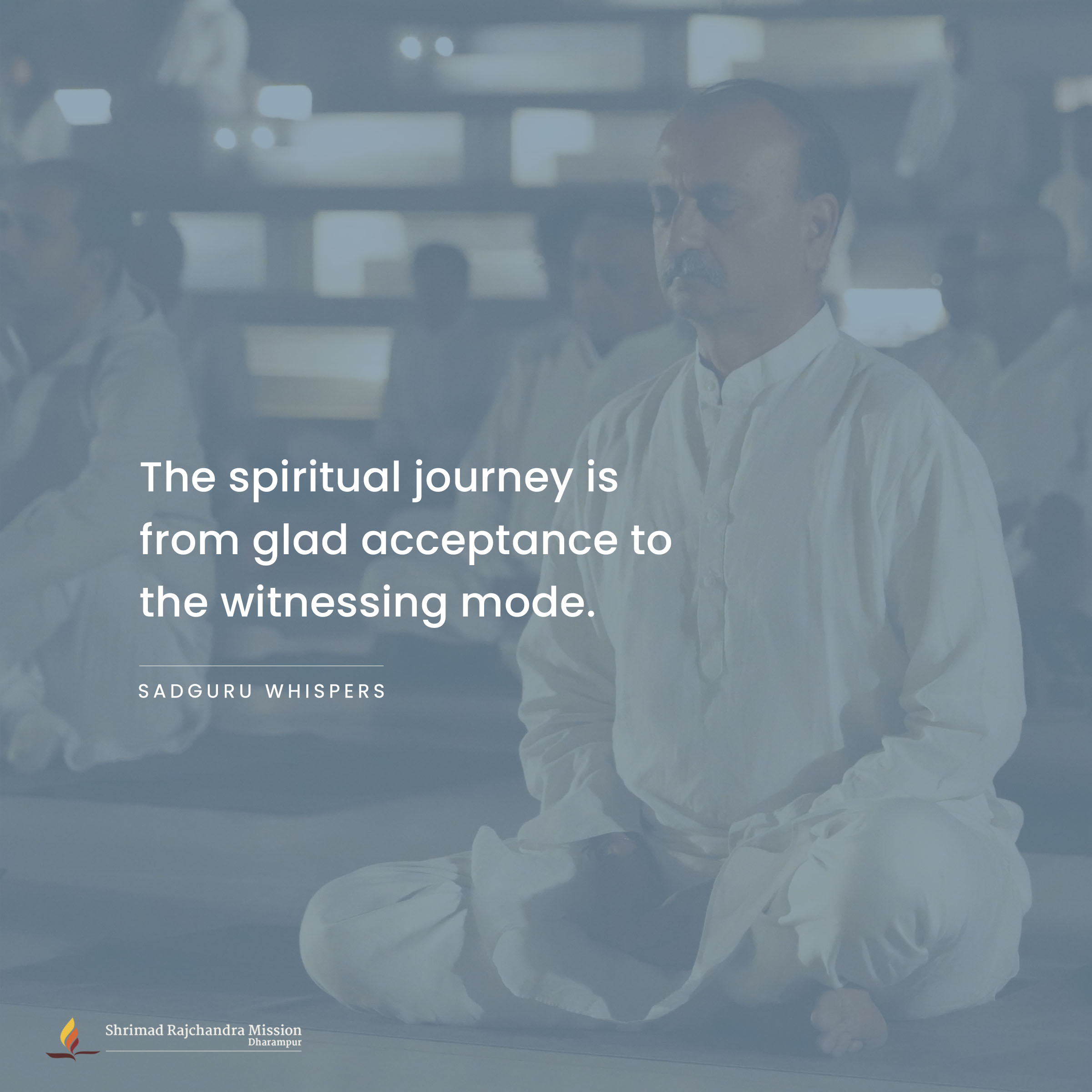 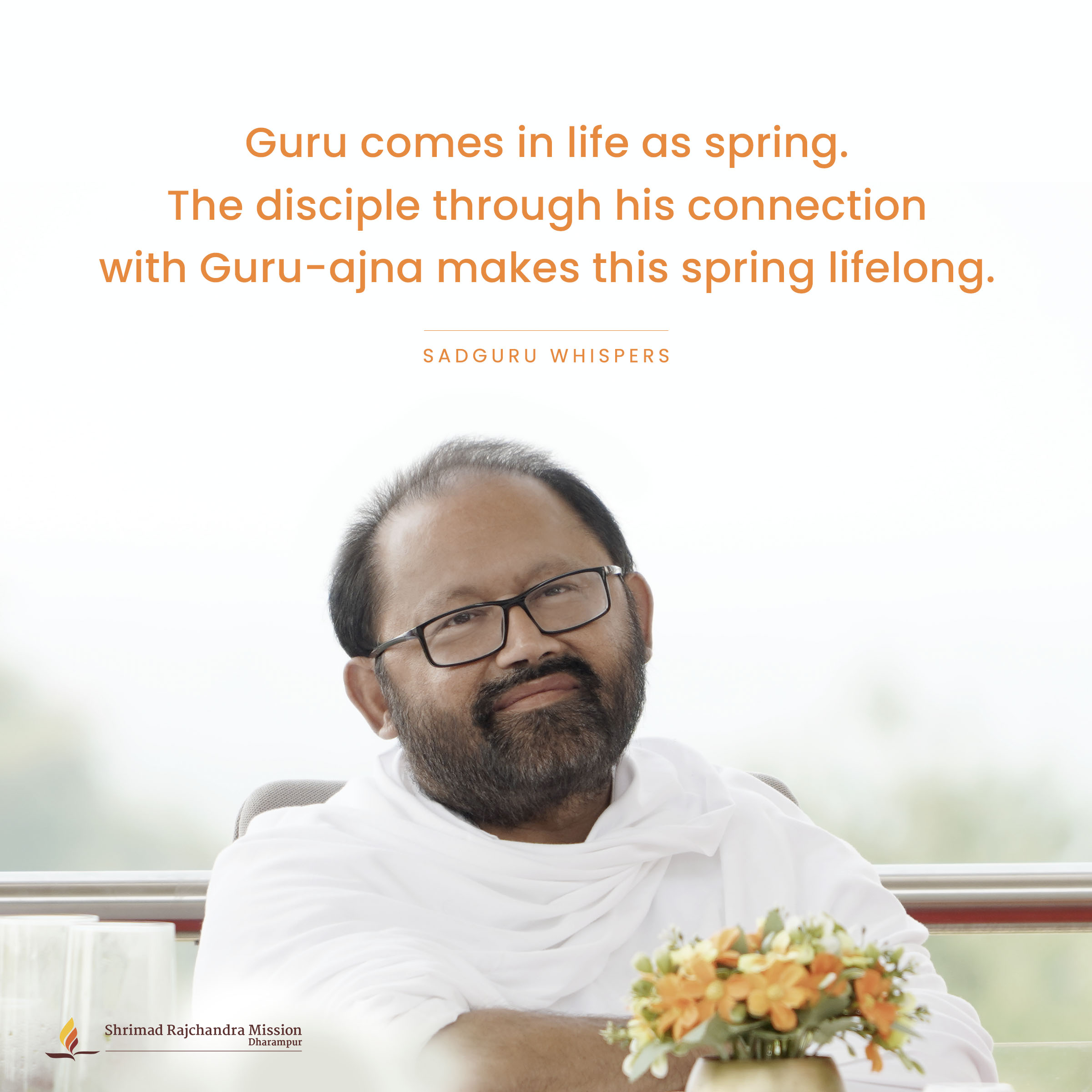