A Journey from My Head to My Heart

Ashwin Mehta, offering seva as Trustee of Shrimad Rajchandra Mission Dharampur (UK) and Leader of London Study Group pens how Pujya Gurudevshri is guiding him to aptly tap both – the questioning head and the loving heart, as he progresses on his spiritual journey

In life, I excelled in academics, would often achieve the highest marks in class and had a competitive streak in most matters. The quest for knowledge was important to me and I was very much centered in my head.

In March 1997, I had come to India with the sole purpose of shopping for my wedding, when one day my uncle, Vanprastha Kumudbhai Mehta asked me if I would like to attend a pravachan at Bombay Market Apartments. I agreed although it was at an insanely early hour of the morning. Fortunately, we were able to briefly meet his rather young-looking Guru, to me Rakeshbhai then, who gave me some books to read. I was supposed to write back to Him with questions. When I went back to London, I read the books with great interest, but was too lazy to put pen to paper, especially to someone whom I hardly knew.

Fodder for my Head

Years went by and life carried on – I got married, had a family, started a business and enjoyed the material pleasures of life. In 2002, I once again had the opportunity to meet Gurudev. He was visiting UK with many followers from India and we were helping Kumud uncle to accommodate them and organise various activities. During the visit, in passing, I asked Gurudev if He would come to our office. He asked me, “Why?” Without much thought, I replied, “Why not?” He gave me a look to indicate that I needed to think a bit more and walked away. I realised that I hadn’t really thought through my reasons for asking and was not completely serious in my request. This left a deep impression on me that I needed to have a clear purpose behind all my actions and words, else they were of no use. This also made me question whether I had a clear purpose in life or was I wandering aimlessly?

Directing my Head and Heart

In 2004, I attended my first retreat with Gurudev at the Royal Holloway College in London and a remark He made touched me quite strongly. He said that we needed to have our very own thoughts and feelings about who we were and not rely on those borrowed from other people. I went for a long quiet walk and realised that He meant that conclusions and realisations experienced personally were amongst the most powerful ones. But even more importantly, I also realised that I, Ashwin, had the capability of experiencing what Bhagwan had experienced! Although I had interacted with many saintly people in the past, somehow there was a strong resonance with Him and I decided that He was the One I wanted to follow as my Guru.

Four months after this retreat, He suggested I start the London Study Group in January 2005. I was excited to start this but only now do I realise what a great privilege He had bestowed upon me as the leader of the London Study Group. It has allowed me to learn about myself and grow in many ways. The golden opportunity to be in frequent contact with Him has been instrumental in maintaining and strengthening my connection with Him. I will be eternally grateful for this as it has, without doubt, changed the direction of my life. Words cannot do justice to express my gratitude.

Letting Go of my Expecting Head

In 2006, I visited India with Gurudev being my sole destination. I was very excited to be with Him. Having hardly spoken to me, He suggested that I go to Sri Ramanasramam – Sri Ramana Maharshi’s ashram in Tiruvannamalai, Tamil Nadu for a few days with a couple of other people. I protested that I had come all this way to be with Him, but then finally went. Once we reached there, we were given a wonderful surprise – He would be coming to stay at the ashram, bringing along the entire group! Having let go of my insistence to be with Him, I opened myself up to a wonderful elevating experience of sadhana, and the joy of Him then coming to be with us was beyond words! I realised why waste time and energy with our small wants and desires when following His ajna would give us more than we could ever have wished for. He taught me a very important lesson that my attachment to His physical presence should not come in the way of following His ajna.

Head Tells You ‘What’ and Heart Shows You ‘How’

We had driven nearly 5 hours from London to the Lake District Retreat venue in November 2011 to do our seva. With the aim of ensuring everything was perfect and ready before His arrival, led by my head, I became increasingly frustrated as to why some areas of seva were unperformed. A series of phone calls followed where I raised my voice and used harsh words. I did not accept the other sevak’s viewpoint or the situation at hand. As the evening darkness fell, we set up a makeshift registration point and people were guided with torches to their cottages. Although there was confusion, the situation was resolved. Of course, Gurudev was aware of the whole episode. He emphasised during sessions, specifically to me, that by upsetting and shouting at people, I may get the job done with efficiency, but He would give me zero marks for seva. It was much better to complete tasks with love rather than through force or fear. This was the mark of a true sevak. It is not ‘what’ I do, but ‘how’ I do it that is most important!

Head Must Introspect with Courage from the Heart

Applying the knowledge gained from pravachans to my life, I had a growing dissatisfaction with my business activity which now felt hollow and repetitive month after month, although it was financially profitable. So I started the process of selling the company. Having received a good offer in 2011, I wrote to seek Gurudev’s ajna to sell it. He replied saying that this was exactly what He had been waiting to hear! He asked me to ensure that there were sufficient funds to support my young family. As things fell in place, I retired from business activity in June 2012 at the age of 44 years. Before suggesting any further seva, Gurudev emphasised that I should spend time to introspect deeply, into my darkest corners, and see where my black areas were. He wanted me to come crying to Him, disgusted with this ‘dirtiness’ inside, such that I could not bear it any longer. I have discovered some of these dark areas, but I have a lot more work to do.

Go Beyond Your Head and Love with All Your Heart

Somewhere along my journey, respect for ‘Rakeshbhai’ changed to veneration for ‘Gurudev’. However, I still often find it very difficult to comprehend, with my limited mind, just who He is. At times, I cannot even relate to the labels of Gurudev, Bapaji, and Saheb with His presence in front of me – He is just too immense and incomprehensible to grasp. This ‘grasping’ is of course a mental activity. The solution is simply to move to the heart, stop analysing and dissolve into that all-pervading grace.

Now, my aim is very clear – to do His seva and attain samyak darshan in this life. My natural tendency was clearly to be in the head and Gurudev has emphasised over and over again that we must be on the level of deepest feeling if we want to scale the greatest heights. Time is running out fast and before the body weakens and the mind deteriorates further, I need to shatter the ego and open my heart – to laugh, cry and dance as a child. My journey from my head to my heart continues, and I sincerely wish that one day He will see tears of love flowing freely down my cheeks and I will become a child whose Father is waiting to take him home. 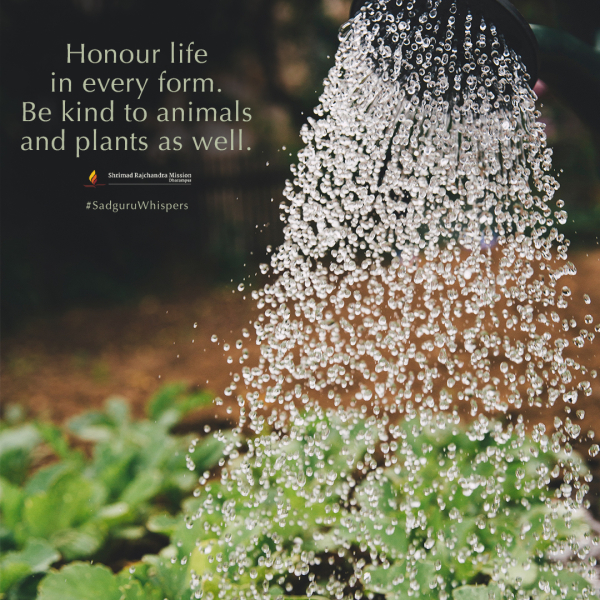 Honour life in every form. Be kind to animals and plants as well. 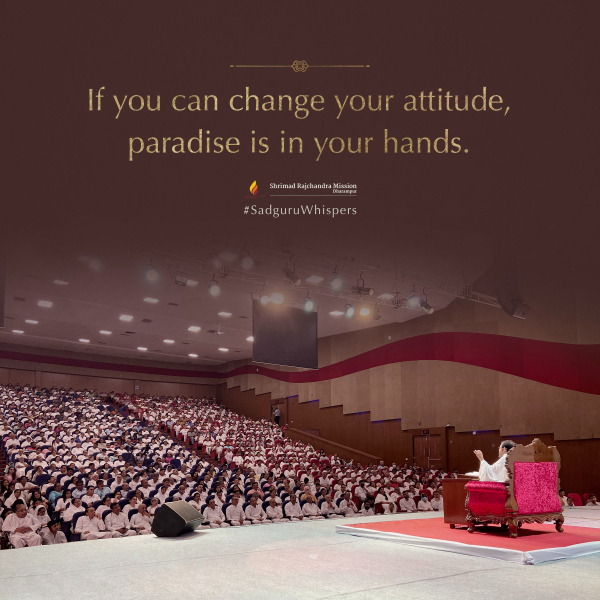 If you can change your attitude, paradise is in your hands. 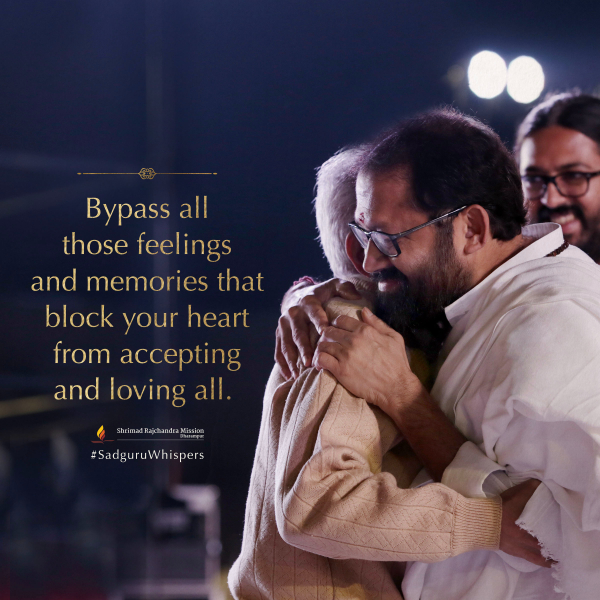 Bypass all those feelings and memories that block your heart from accepting and loving all. 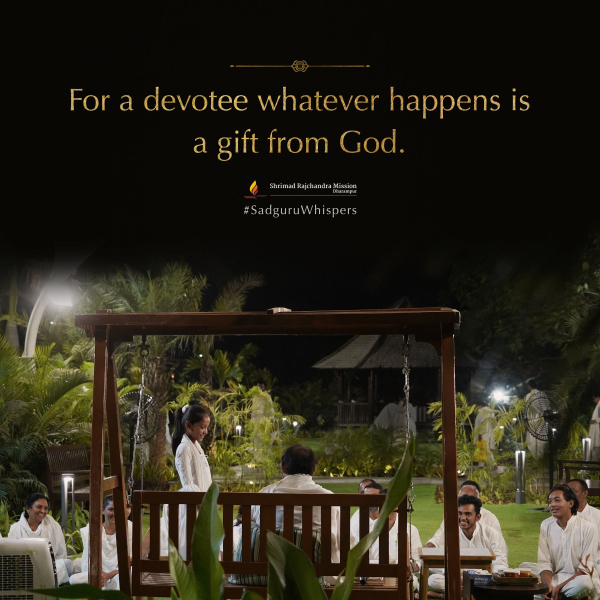 View All
#SadguruWhispers If you can change your attitude, paradise is in your hands.