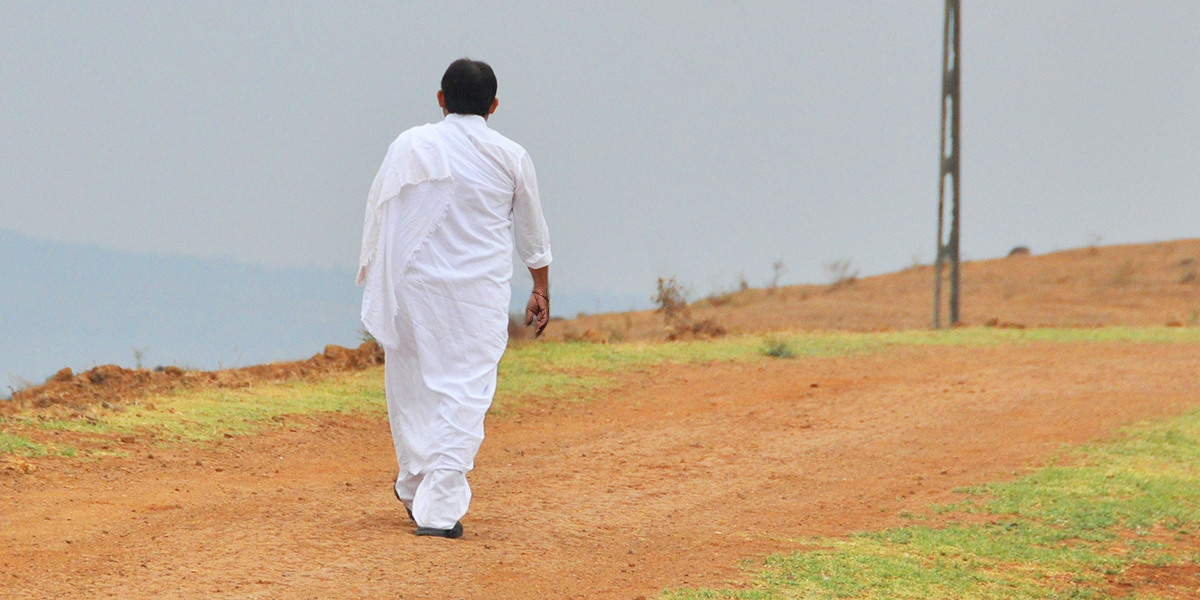 The Joy of Renunciation

Do you think of renunciation as painful abandonment? Or does a life of renunciation enthral you as an honourable one? Illustrating the wrong concepts regarding renunciation, Pujya Gurudevshri urges us not to wage war by forcibly imposing controls on ourselves, rather to strive for right understanding and inner transformation

Today’s society offers two distinct ways of life – there are those who wish to live a householder’s life and those who do not. The former follow the institution of marriage and the latter, the order of monkhood. Dispassion must be the propelling cause of renouncing the world and accepting monkhood. However, those who do not wish to adopt a married life may do so for various reasons. Some fear losing independence; while others, having seen couples quarrel, abhor marriage. Some are afraid of getting trapped in the enchantment of the world. It is observed that many times the cause of taking up renunciation is hatred for the world.

According to the Enlightened Ones, the right perspective should be, ‘I take this course of life because I like it. I may have attraction for the world but I have much greater attraction to live a life in the shelter of my Sadguru, to attain realisation of the blissful Soul.’

Only an affirmative resolve to live a life of renunciation for the sake of the higher, and not out of weariness of the world will keep one happy and inspired even when one encounters negativities en route to self-realisation. However, due to lack of right understanding, the true meaning of renunciation is lost and a tradition of considering renunciation as mere restraint prevails.

Renunciation is Not Mere Control

Most often, renunciation is misunderstood as denial, opposition, control etc. He is considered a renunciate who denies himself; who eats less, sleeps less, does not get married and has given up possessions. The more he denies, limits and controls himself, the greater renunciate he is considered to be. This makes renunciation negative. By and large society is unaware of the positive connotation of renunciation.

Worldly people expect inner transformation merely by bringing about external changes. For them, keeping count of external activities is important and so they stop at that; while the true aspirant seeks transformation within, giving importance to an inner change.

If you become satisfied with external practices of vows or austerities, how would you ever be inspired to turn within or even feel guilty for not having turned within? A genuine aspirant is satisfied only when he knows that his mind has remained calm while engaging in outward austerities. Taking care of the stability of his inner state, he respects and follows the code of conduct. Even though he performs practices scrupulously, he considers only those austerities as fulfilled, which have brought inner transformation.

Renunciation is Not Struggle

The negative practice of renunciation leads to inner conflict. You do not gain anything; instead, it drains you of your energy. A part of your mind craves for pleasure; another aspires for renunciation. Your personality gets fragmented. Divisions of your mind begin quarrelling, each fighting to win over the other. You believe that you will be victorious if you fight with your inclinations.

The Enlightened Ones say that certainly this path is of winning over the lower but not by waging war against one’s self. You may wonder how anyone can be victorious without a fight. But think! If both your hands fight with each other, who will win and who will lose? In either case, you are expending your own energy. The winner or loser in both cases is you alone. How can the Enlightened Ones ever instruct you to follow such renunciation that creates a split within, and waste your life in conflict and confusion?

Renunciation is Not Suppression

According to the Enlightened Ones, a renunciate is he who abides in his true nature. Revelling in the Self has made the renunciate’s worldly inclinations powerless. His celibacy is not born out of self-control but his strength of celibacy is so strong that passion cannot raise its head. The more he has increased his strength of celibacy, the more he is able to win over his lower passions. Such is the positive definition of renunciation.

You cannot persevere on the path of renunciation by suppressing your passions. If you have not opened the gateway to bliss within, you will surely fall into the trap of worldly pleasures to fulfil your suppressed desires. In the weak moments of inattentiveness, they will bounce back with greater vigour. You may suppress one of your senses but soon the other will raise its hood. Attachment for one will replace the attachment for another but the passions will not be annihilated, instead they may even increase. He who wishes to abide in the Self, and he who revels in such practices alone knows where and how to harness his energies. The word renunciation is very meaningful. It cannot be confined to mere suppression. Rather, it is a tranquillity that cannot be disturbed by anything external. A renunciate is he who does not waver, who does not become unstable. He steadily abides in the Self. He is in such ecstasy that inclinations lose their power over him.

Renunciation is Not Pretence

He who tries to progress with the negative understanding of renunciation does not blossom or emanate spiritual radiance and happiness. If he was following the correct practice of renunciation; his purity, joy, stability would increase. However, these virtues are not seen in him. His feet do not dance in tune with inner ecstasy because he is tied with fetters of empty vows. Not only does he feel miserable about not having reached anywhere with his mechanical practices of denial, but he also does not have the heart to admit it. Lacking innocence and straightforwardness, he silently suffers the pain of such pretence. Yet, his tricky mind calls this inner conflict, dharma.

People only see how little food he eats and how few pairs of clothes he possesses. For them, even one who is full of negativities and unintelligent becomes praiseworthy if he eats only once a day and anyone in the garbs of a monk becomes worthy of worship. Only a truthful aspirant will accept that he does not possess the virtues of a monk as given by Tirthankar Bhagwan, and he is unable to practise monkhood as expounded by Bhagwan. Others carry on with pretence to keep their status in society.

Renunciation is not mere restraint. With such a negative definition, you completely miss the essence of renunciation. Mere restraint brings restrictions in life, hinders spiritual growth, and does not give rise to the joy of fulfilment. On the contrary, one who follows true renunciation transforms from within and is extremely happy, for he is on the path of absolute freedom.

Renunciation is not like the withering of a flower at dusk, but it is like the flowering of a bud at dawn. It is not a condition of apathy, but a state of dancing in ecstasy. It is neither shying away out of fear nor a practice born out of enticement. It is like the notes resonating from the strings of one’s heart in the moments of bliss. Therefore, it is very important to understand renunciation through its affirmative definition – practising absorption in the blissful Self.

Yearn to realise your real nature. Remain engrossed in the practice of being in your pure Self. Harness all your energy to get established in the peaceful powerful Soul. Come to revel in the bliss of the Self. 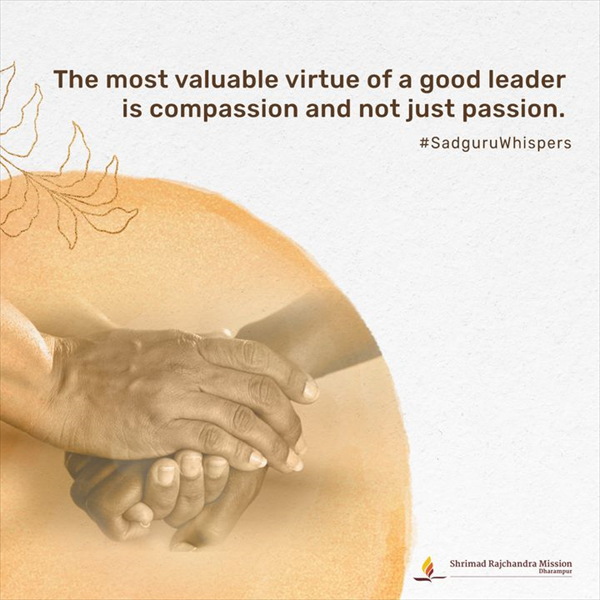 The most valuable virtue of a good leader is compassion and not just passion. 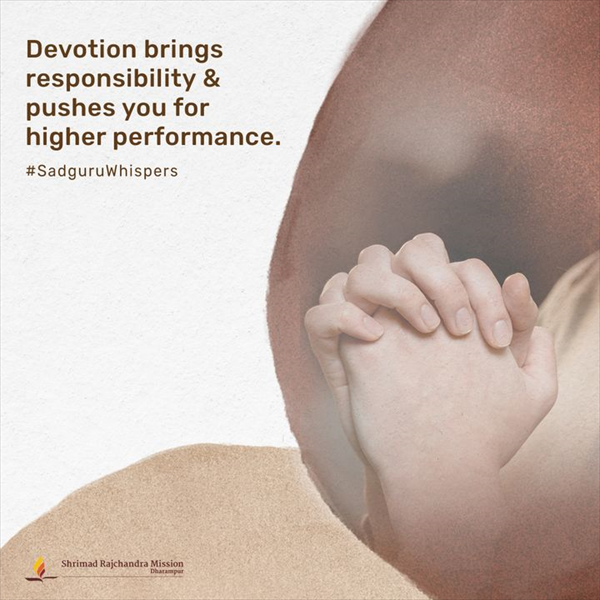 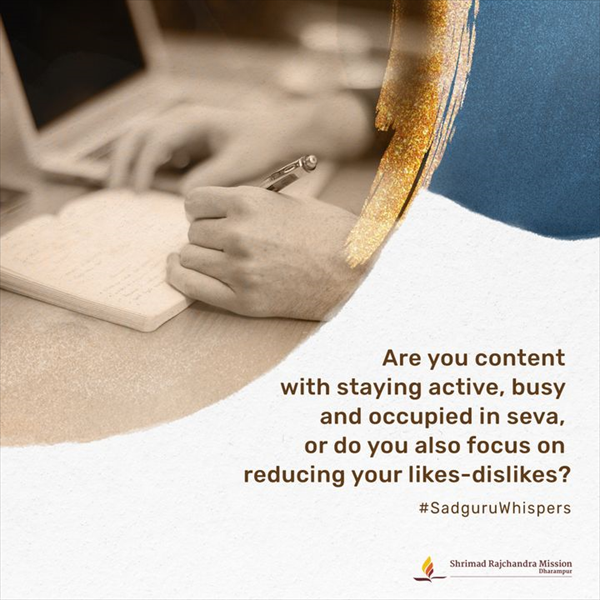 Are you content with staying active, busy and occupied in seva, or do you also focus on reducing your likes-dislikes? 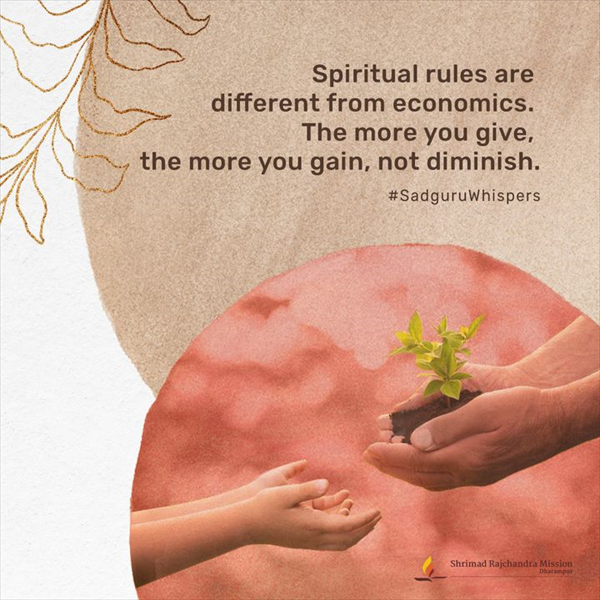 Spiritual rules are different from economics. The more you give, the more you gain, not diminish.