The Guru Frees You

Are you bound or free? Though we harbour the belief that we are free and independent, Pujya Gurudevshri gives us an insight into the reality that we are bound by our faulty thinking and beliefs. It is the Guru, who awakens us to this fact, liberates us from our bondage and sets us free in the open skies

Saints say that you are bound; however, no one has bound you. Your bondage is not from outside. It is due to your own wrong beliefs, your incorrect thinking and faulty way of living. Only a rare few have become free. The rest live in bondage, without even being aware of it.

If you are not even aware of the bondage, how will you make an effort to free yourself? Over and above that, you live amidst people who are also bound. Who can make you aware of your bondage? They too are locked up in their own little worlds. They have neither experienced freedom, nor are they aware of it. Like a caged bird unaware of the open sky and unknown to the wings to fly, you imprison yourself. Some of you are confined in the iron cage of poverty, some in the golden cage of wealth, while some are in the diamond- studded cage of power and status. You are all captives.

Even if someone, out of compassion, opens the door, the bird so used to being in the cage will not fly out. It has forgotten how to fly. The wings have lost their strength and the bird no longer has the confidence to fly. The bird itself strengthens its bondage by not wishing to be released.

The Need for a Guru

To become free, it is essential to have the realisation of this self-created bondage. You will need someone who is free and can make you worthy of the flight, one who can inspire you to strengthen your faith before taking a flight into eternity. Such a one is the Guru. This is the sole purpose of the Guru.

There are many who have been released from the prison and are experiencing the joy of absolute freedom. They are the Siddhas, the Perfected Ones. But neither do you have any access to Them, nor can They return to the prison. If you were qualified enough to leave the prison and meet Them, you would not need Their help. The Guru is in that state of consciousness which is like the Perfected Ones, but is still with you. Out of compassion, it is the Guru who wakes you up from your metaphysical slumber. He makes you believe that you have wings and reminds you of your capacity to fly.

Guru is a Paradox

The Guru may look like you but He is categorically different from you. He lives with you but is far away from you; He is in the prison but is free from bondage. He is seen in the cage, but will be out of it soon. He is here only to pay-off His debt of karmas. This task has already begun. Now there is very little time left. Once His debt is paid, He will be gone too. He is free while living in the body, and very soon will become free of the body too. After this, He will have no form for you to see, you will not be able to feel His touch, listen to His words of wisdom. As soon as His karmas are exhausted, He will bid you farewell. You have very little time to utilise and benefit from His elevating divine presence. If you have even a little intelligence, make the most of the moments that you are in the company of the Guru, because once He departs from the body, though you may cry out for Him, pine for Him, you will not get such an opportunity for eons.

Around 225 years ago in France, the revolutionaries stormed a fortress named Bastille, which was then used as a state prison. Hard-core criminals sentenced for life were kept there in chains for more than 40 to 50 years. The chains had no lock or key and could be removed only after their death by cutting their arms. They remained in dark suffocating windless cells from where they could see no sky or sun. Whether day or night, spring or autumn, the darkness was the same. The revolutionaries broke into the fortress and started releasing the inmates. They assumed that the prisoners would be overjoyed and grateful and dance in ecstasy on experiencing freedom. Instead, they looked sad and did not wish to get out. Some aged prisoners wondered how they would spend the rest of their lives; some had felt so secured and cared for in the jail that they worried about earning a livelihood, they did not want to give-up their free meals. Others felt that in the jail, at least they had a place to sleep and when released, they would have to work hard to find a place to live. Some feared light and others were pained to think of a life without chains because darkness and bondage had become a part of their lives. The revolutionaries did not pay heed to their whining and forcibly brought them out of the jail. The next morning, they were taken aback to see that half of the prisoners had returned to the jail because they did not feel secure outside. Jail was no more a punishment for them. They had begun enjoying being in the prison.

Similarly, you too feel so secure depending on others that you cannot even imagine a life without all that you are bound to. You have started decorating your cell considering it to be your abode. When you feel so much at home in your prison, why would you want to come out of it? If you have no desire for freedom, how will you ever be liberated? Who can bring you out of your so-called home?

People you live with are also prisoners, bound just like you. You help and console each other. You have persuaded yourself and others around you that the sorrows are no sorrows; they are only means of happiness! You have learnt to live with false hopes. There is a dark night and you live in the hope that it will be dawn soon, not realising that till you free yourself from bondage, the night of sorrows will not end and you will not see the dawn of bliss.

This hope of happiness while being in the cage does not allow you to step out of your prison. It keeps you tied up inside. If you choose to remain asleep, who can awaken you? If you have decided to remain ignorant, who can make you learn? It is the Guru alone who can bring awareness of your bondage and its causes. He arouses the need to become free and guides you to liberation.

Liberation is here and now but you are not ready for it yet. Even if you are pushed towards it you will return to the prison. Not just return, you will hold it tight and resist too.

The Guru prepares you for the freedom. He knows the way out of the prison. He has seen the open skies. He has felt the fresh air. He has smelt the fragrance of the flowers. He has heard the chirping of the birds. He brings a piece of that sky into your cell. He can awaken you to that experience. He alone can impart wisdom and bring awareness in you.

The Guru not only prepares you to take a flight but also kindles faith in you. He equips you so well that no obstacle will appear to be a hindrance to you. He will train you in such a way that you begin to live a life of self-awareness. No trials or tribulations, hurdles or impediments can then make you unsteady. Every difficulty will turn into a challenge. You will joyously and fearlessly pass through all uncertainties. Every uncertainty will make you confident and offer an opportunity to spread your wings wide open. The skies will not frighten but invite you.

Being blessed with such a Guru, remain surrendered at His Lotus Feet. A disciple benefits from the Guru when he is ready to understand and follow His commands scrupulously. With unswerving devotion, surrender to the Guru; break the shackles of ignorance and fly out into the infinite skies of eternity

On the auspicious occasion of Gurupurnima, let us pay obeisance at the Lotus Feet of the ever Compassionate Sadguru and celebrate His infinite Grace. 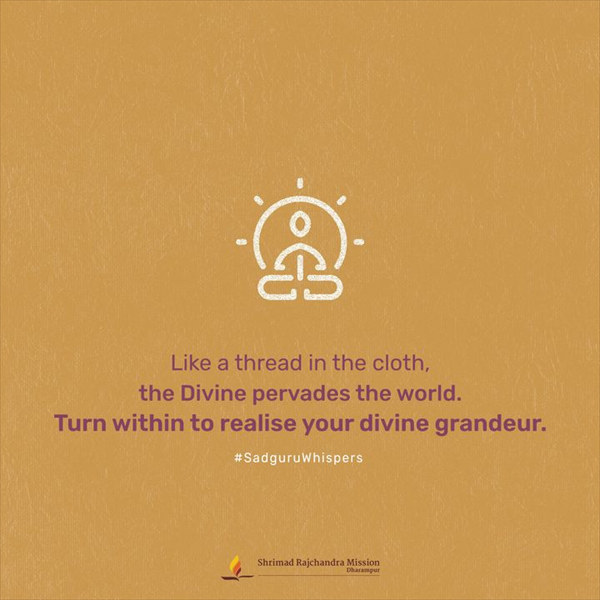 Like a thread in the cloth, the Divine pervades the world. Turn within to realise your divine grandeur. 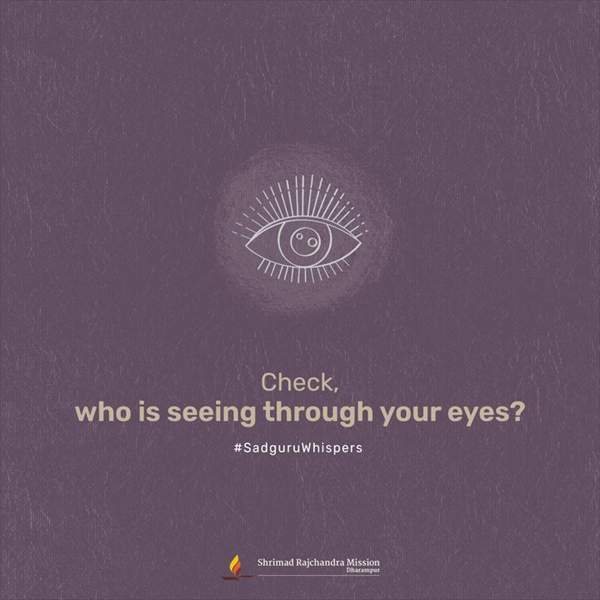 Check, who is seeing through your eyes? 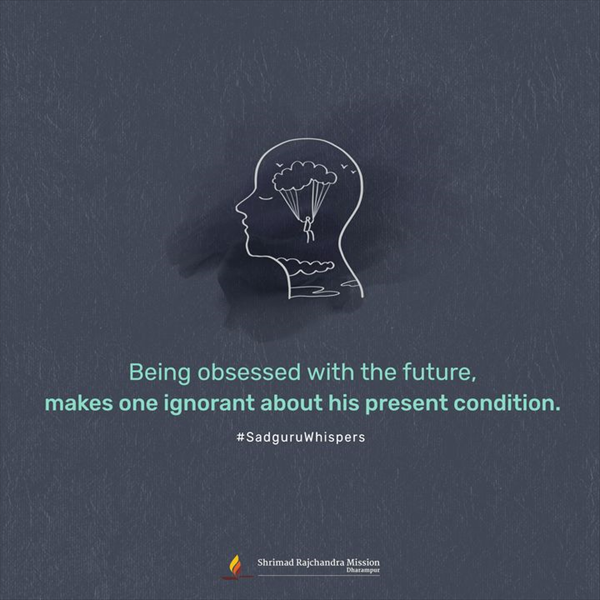 Being obsessed with the future, makes one ignorant about his present condition. 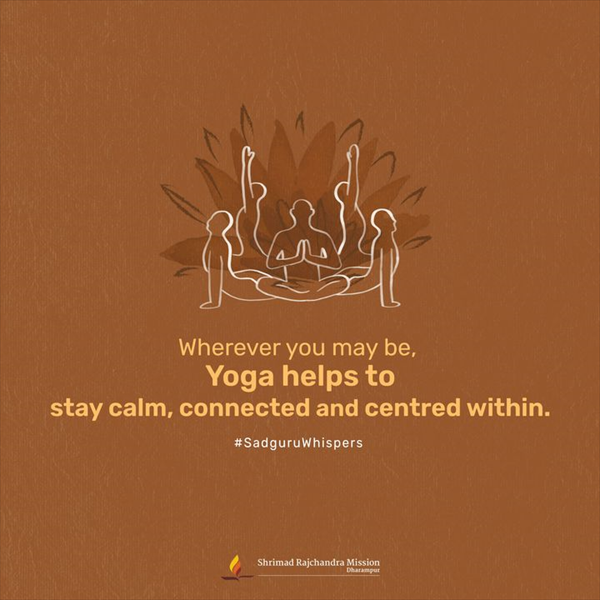 Wherever you may be, Yoga helps to stay calm, connected and centred within.

View All
#SadguruWhispers Check, who is seeing through your eyes?