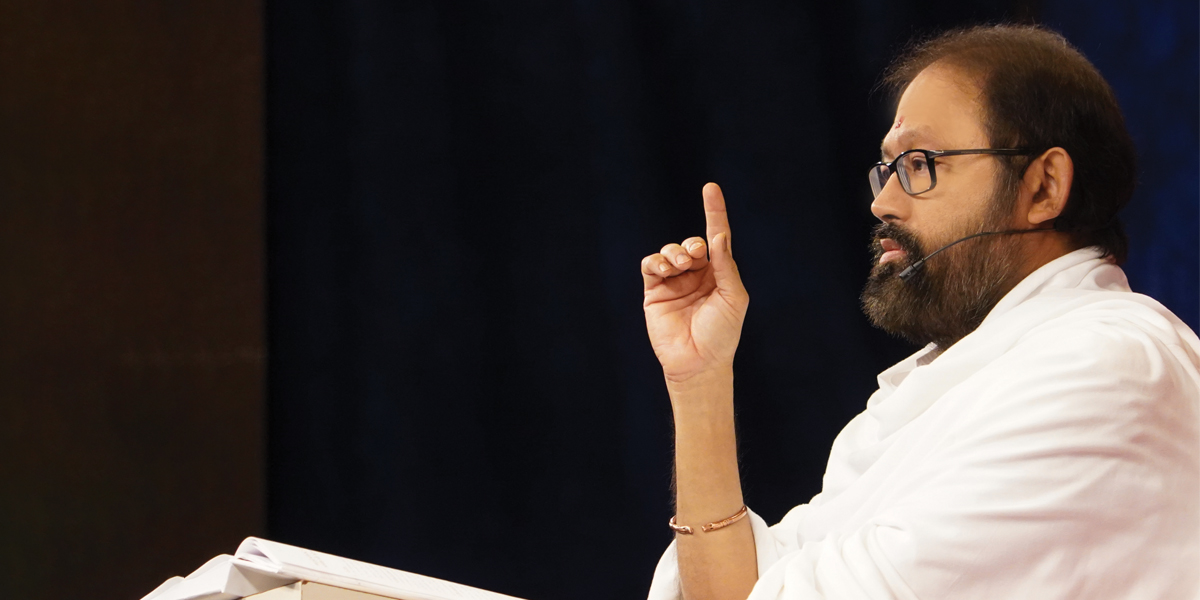 The path of Shri Atmasiddhi Shastra is the true and eternal path of the Jinas. Pujya Gurudevshri shows how Param Krupalu Dev explains this path by revealing the real cause of miseries, and guiding the seeker to Self-realisation

Dharma is to understand one’s Self as different from the body and adharma is identifying oneself as the body. Whatever one does with his deluded understanding is the path of transmigration, while anything done with awareness of the Self is the path of liberation.

Do you feel the same disgust while identifying with the body as what you feel when you touch dirt? Do you feel a pain when you identify yourself as the body? How long will you connect dharma with external rituals? Seeker is he who sees even the body as outside of him, not a part of himself.

Freeing the consciousness from the identification with the body is dharma. But without understanding this, people are so attached with the body, clothes etc. that they cannot become free from them. Make this your firm conviction that like clothes, body is just a garb that you are wrapped in. Though together, it is distinctly different from you. The conviction of this separation should become so strong that the age-old habit of becoming sad when the body suffers and becoming happy when the body is comfortable gets annihilated.

The Enlightened Ones say that you have misunderstood the house you live in as yourself. When the roof is painted, you feel you are coloured; when it breaks, you believe you are broken, and when it is burnt, you feel you got the burns. But no such modifications are happening in you. You are here to live in this house for some time.

Thus, the cause of suffering is not the happenings in the world but the delusion that they are happening to you. Nothing in the world has the capacity to touch your soul. Only you have all the power to do infinite good or infinite harm to your soul. Dharma is to remain in constant awareness that you are not the body, while you are sitting-standing, asleep-awake, eating-fasting, during comforts-adversities.

The consciousness of the ignorant one is ever going out through the senses and so it can accept only the forms. What you see is just the form. But there is also an existence of that which is not seen. The senses cannot know that which is knowing, thinking and feeling.

One whom you saw living till yesterday is seen as dead today. Everything that was known through the senses is the same as yesterday, yet nothing is the same. That which was not perceived by the senses has left, and its departure could not be seen. You cannot say that the body is like a clock that functions as long as the machine is in order and one fine day, it stops, so there is no need to believe that something does exist that cannot be grasped through the senses. How can such invisible thing be proved, accepted, or believed in? But it can be known, it can be certainly proved through experience.

The Knowledge of ‘I am’

Everyone has the knowledge of ‘I am.’ But how does one know that? By what means? The senses cannot know. Even when they stop working, there is an unbroken knowledge of ‘I am.’ This proves that the nature of the soul is consciousness. Through senses, it knows the world. The senses are its tools, not necessity. Though formless, it can know all the forms.

Not realising this nature of the Self is the sole reason for suffering. Forgetting that the Self is the abode of bliss and identifying with the body, remaining estranged from one’s nature, or being away from one’s centre is the cause of suffering. Shri Atmasiddhi Shastra establishes the existence of the soul through various approaches of logic, explains its true nature and also the divine path of realising it.

Your house has three rooms – body, mind and soul. You have known only two and have been oblivious to the third. Within you is the light, the bliss and all treasures. But you have been seeking happiness outside. You have used only the first two rooms of your own house, and have not found happiness. Now, try the third one. Param Krupalu Dev talks of this third one which is in fact your real home, the centre. Dharma is a way by which you abide in the centre.

The lives of those who get centred undergo such transformation that seeing Them even others can feel that happiness lies within. Seeing Them in supreme peace, supreme contentment, one gains the faith that the abode of bliss is within. Their state of desirelessness is the mark of Their abidance in the blissful nature and of the experience of fulfilment.

Why is Suffering not Liked?

Though you pursue freedom from suffering, you have never questioned why you detest sorrow. ‘Why do I seek happiness and not pain?’ The Wise Ones say that it is because suffering is not your nature. It is contrary to your true nature. If it were your nature, you would not oppose it. Rather you would readily accept it. But the fact that you do not welcome suffering shows that suffering is neither your nature, nor does it enrich you. And so you seek to become free from it.

The Journey of Self-realisation

The one in whom this churning has begun has started on the path of seeking happiness, the path of Self-realisation. Param Krupalu Dev has shown the path of liberation in Shri Atmasiddhi Shastra which begins with the reflection on the cause of suffering. As one moves forward on this quest, one determines the true nature of the Self that leads to Self-realisation. He attains the state beyond the body whilst living in the body.

Be in the world as a witness, not a participant. 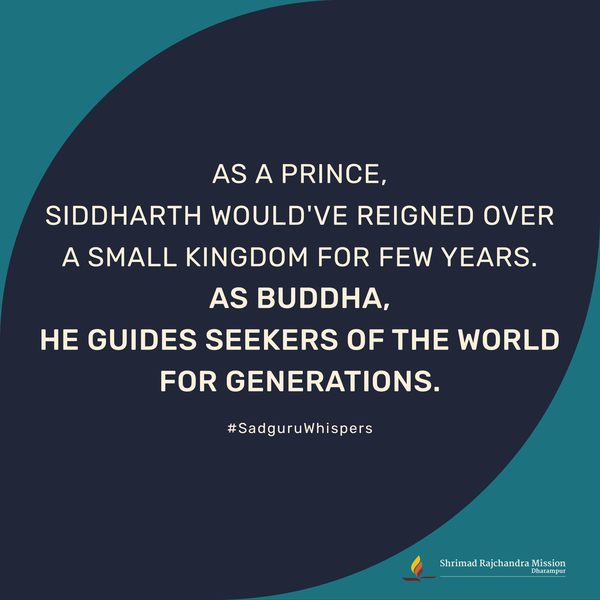 As a prince, Siddharth would've reigned over a small kingdom for few years. As Buddha, He guides seekers of the world for generations. 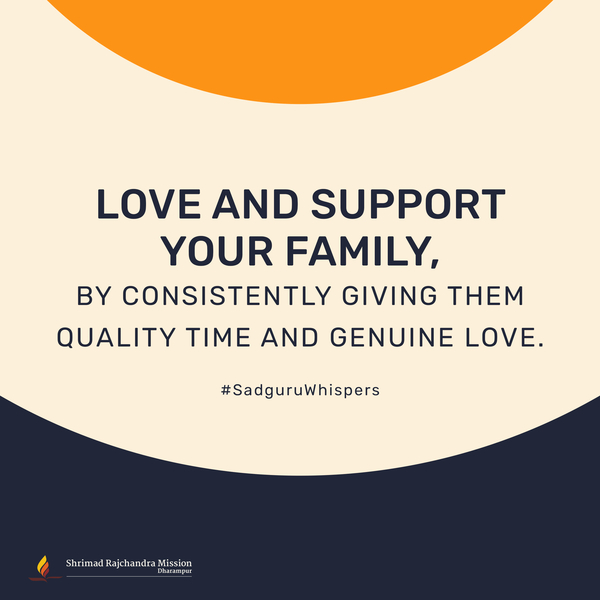 Love and support your family, by consistently giving them quality time and genuine love. 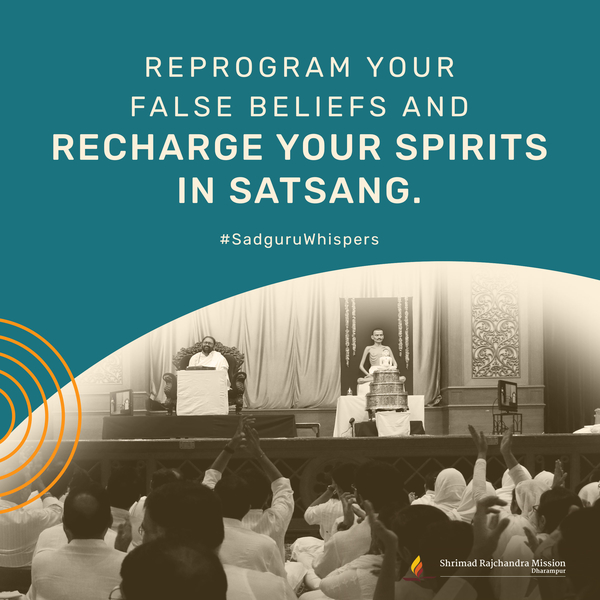 Reprogram your false beliefs and recharge your spirits in Satsang.

View All
#SadguruWhispers As a prince, Siddharth would've reigned over a small kingdom for few years. As Buddha, He guides seekers of the world for generations.