Just as the word flower has no colour, fragrance or softness, the word truth has no happiness, peace, and security in it. Pujya Gurudevshri tells us not to feel satisfied with word-knowledge and encourages us to think, understand and realise truth within ourselves

Truth is real only when it is your own experience, not someone else’s. Truth cannot be given, transferred, borrowed, stolen or received in alms. Truth is a wealth that must be earned by your own effort. What you consider as truth is actually a concept of truth. It is not what you have realised. You have blindly accepted what has been passed on to you by your ancestors, parents, society, scriptures or spiritual teachers. What is passed on cannot be truth. Truth lies within you and hence you must realise it by your self.

If it is not possible that someone loves and you feel its joy, or someone dies and you experience death, then how can it be possible that someone realises truth and you experience it? You are in delusion if you think that someone, out of compassion, will give you truth in charity. This is never possible. If it was possible, then all the Enlightened Ones thus far, would have given truth to others, and today, everyone in the world would be enlightened.

Scriptures Can Not Give Truth

It is a misconception that scriptures contain the truth, and by reading and memorising Agams, Upanishads, Bible or Quran, you will acquire it. You can get words from scriptures, not truth. Words can give a road map, not the experience. Words can’t even fully explain truth let alone giving truth. For that, each one must go through the process of spiritual evolution. Nothing can ensue from mere reading or memorising of scriptures. To experience truth, you must bring a revolution within, a transformation in your self.

The Enlightened Ones, out of compassion, give pointers to explain the truth. Their constant endeavour is that you get inspired to realise the truth, the quest for truth is kindled in you, and the yearning for truth begins your journey. But the ignorant fail to grasp the intent hidden in the words of the Enlightened One and remain deluded.

The Enlightened Ones ask to begin your journey of truth with thinking, not with believing. You benefit not by blindly believing in what has been said about truth, but when you independently reflect upon it, experiment with it, and then conclude based on what you find from your effort. Believing without thinking is harmful. It limits your understanding, stops your experimentation, brings an end to your quest and eventually, there is no inner transformation.

The Enlightened Ones want that Their teachings are not blindly believed, but rather Their intent be grasped and understood. In order to understand, you need open-mindedness and awareness, not a belief. Those who form belief by hearing alone put in no effort to understand. And without the earnestness to understand, truth is not realised. Without the dawn of thinking, old values and thought patterns do not undergo transformation. This is why, in spite of ‘possessing a right belief’, no transformation is seen in life. Instead, if you go through the process of right thinking, and arrive at the same conclusion, its impact is certainly seen in your values, inclinations and conduct. In following the right process, there comes an upheaval in your wrong concepts, opinions, interpretations and insistences.

When this order is reversed, then belief comes before thinking. Believing before thinking is like becoming pregnant before marriage. Beliefs formed without thinking create doubts en route and hinder your spiritual progress. This does not mean that you must not have faith. Not accepting without thinking isn’t doubting. It only shows that you wish to think before you can own it. Understanding after deliberation can free you of all doubts.

The more you try to understand, the deeper you grow in understanding. But your eagerness is not in understanding Guru’s intent; it is in blindly accepting His words as truth. You have misinterpreted blind acceptance as faith! Your hasty acceptance is not faith; it is your mental lethargy. Surrendering to the Guru is not slavery, helplessness, or laziness. Faith must precede surrender but faith without thinking will ruin all three – faith, understanding and surrender.

When you are lazy to do the inner work, you are driven by someone’s impressive personality or clouded by people’s opinion, and you start accepting without understanding! You accept Guru’s words as truth, but if it has not become your truth, then under challenging circumstances, you start doubting. If you are not ready to think, then progress on the path to liberation is impossible.

A true disciple is one who is discriminative. He acquires the ability to discriminate between truth and untruth, through purity and right thinking that have manifested in him by following his Guru’s teachings. And where there is discrimination, there is awareness. Such a disciple lives in present moment awareness.

But the follower is not discriminative. Therefore, he is always in fear and confusion. Life changes each moment, new situations and confusions arise every day, and for these, he wants a fixed answer. Like readymade garments, he wants ready answers proudly calling them ‘guidance’. He wants such ‘perfect guidance’ that lasts his lifetime! Fixed answers to changing situations naturally keep failing and his problems remain unresolved.

In a village in Japan, there were two temples. The priests of these temples had such enmity towards each other that they even discouraged their children from being friendly to each other. Children being innocent would still talk and play with each other. One day, one of the priests saw his child talking to the other priest’s child. He angrily asked his child about what they were talking. The child said, “I was asking him where he was going, and he said, ‘Wherever the wind takes me!’ I was dumbstruck with his answer.” The priest’s ego was hurt. He prepared his child, “The next time he says that, ask him, What would you do if the wind stops?” The next day, when they met, the child asked, “Where are you going?” The other said, “Wherever my legs take me.” The child wasn’t prepared for this, and was again dumbstruck with that unexpected reply. The father priest heard this and became furious. He started accusing the other priest’s child for not being consistent and changing his answers every time. Once again the priest prepared his child, “If he says that, ask him, what will you do if your leg breaks? Would you still go?” Next day when the children met, the child asked, “Where are you going?” expecting the reply to which he could give his prepared response. But to his surprise, the other child once again responded differently. He said, “To get some vegetables.” What would the child do now?

Fear of Making a Mistake

Expecting ready answers or guidance is not the spirit of a true seeker. It is foolishness and laziness, guised as surrender. Without properly understanding the problem, you err in even seeking guidance. You may remember by heart the words of the Enlightened Ones and yet, without right thinking, you will always remain dependent, unsuccessful, immature, confused, and in fear.

Fear of making mistakes will not let you cultivate your discriminative ability. Learn from your mistakes. Own the mistake as soon as you have realised it and do not repeat the mistake. When longing for security supersedes courage, seeking stops. He does not have the will to continue; he remains confined whereas the adventurous seeker takes the leap. When the situation in which the guidance was taken changes, a seeker focuses on Guru’s vision and His intent rather than sticking to His words, and then takes a decision accordingly! One who loves and is devoted to Guru’s intent, his spiritual welfare is certain. 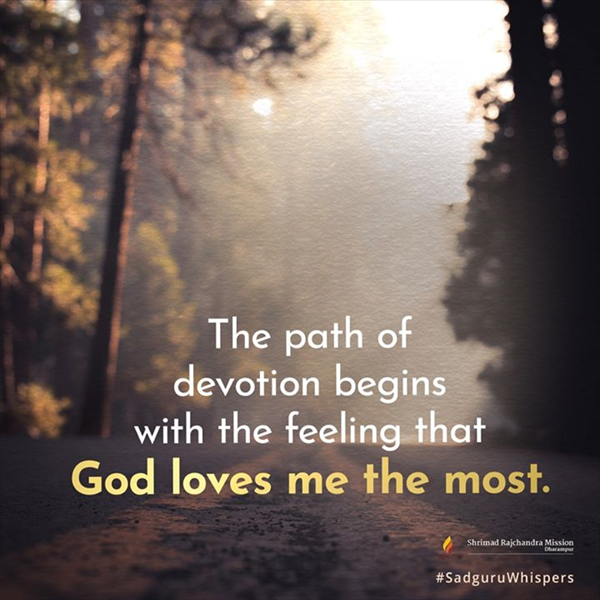 The path of devotion begins with the feeling that God loves me the most. 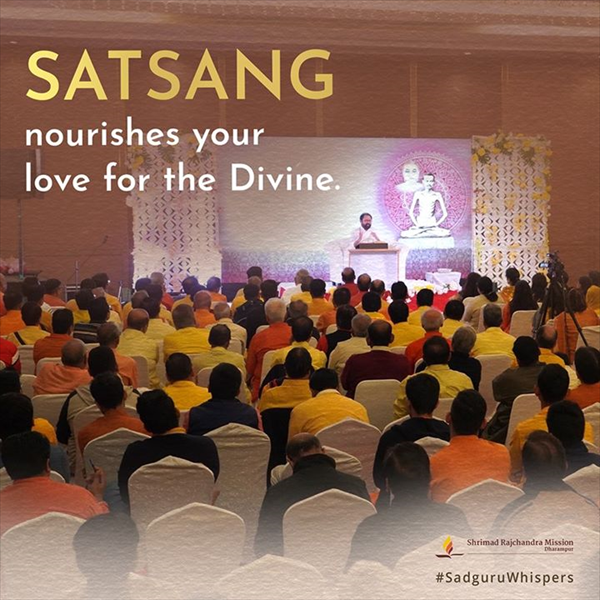 Satsang nourishes your love for the Divine. 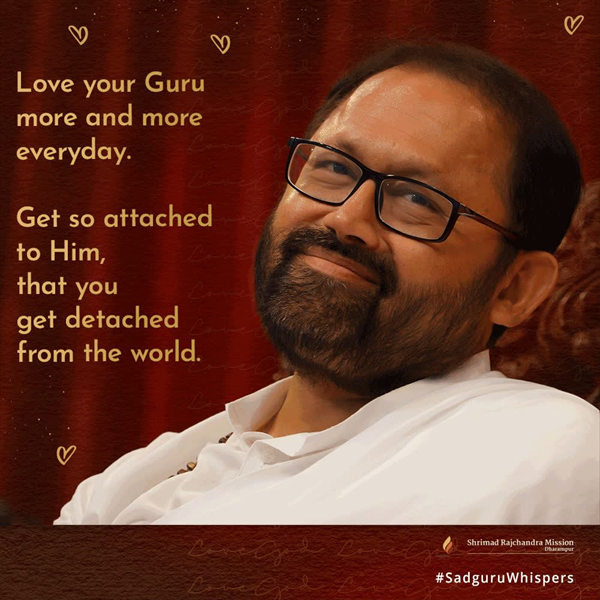 Love your Guru more and more everyday. Get so attached to Him, that you get detached from the world. 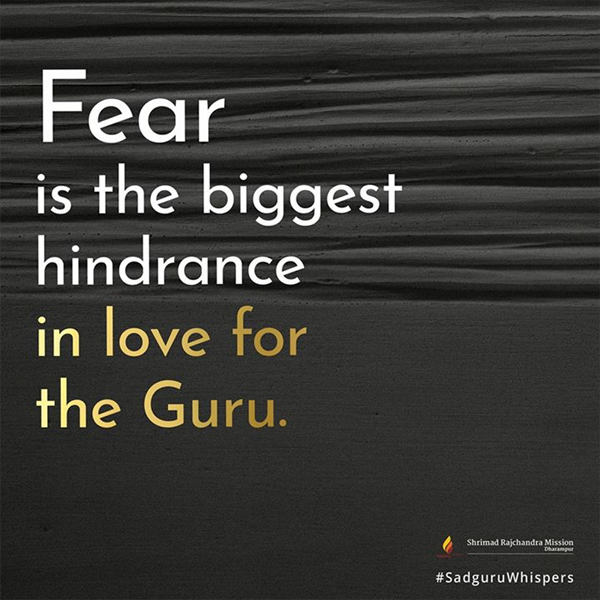 Fear is the biggest hindrance in love for the Guru.

View All
#SadguruWhispers The path of devotion begins with the feeling that God loves me the most.