Enlightened One – Traditionalist or Reformist?

A living Master is often criticised for the reforms He brings in existing religious traditions. Pujya Gurudevshri explains that this is inevitable to ensure that the essence of dharma remains an eternal flame. Let us pay tribute to Param Krupalu Dev, who has brought about this revolution in an exemplary manner

An Enlightened Master alone can direct one on the path of liberation. But alas, the absurdity of the world that often while the Guru is alive, He is not recognised, He is criticised and after He has left His body, His idols are worshipped. Why does this happen? One of the primary reasons is that man sees the living Master as unconventional; His conduct and means of promoting spirituality appear different than the traditional customs. Thus, there is fear in accepting Him or there is a sense of defiance towards Him. The question may then arise, is the living Master a traditionalist or a reformist? Does He propound the path in a conventional way, or going away from the tradition? Does He expound a completely new path?

Revolution – Where and When?

Revolution in the spiritual world may seem equivalent to revolt but at its core lies congeniality. You may question how this is possible. Spiritual practice has two components – the inner and the outer. The practice of right faith, right knowledge, and right conduct forms the inner component and the prescribed do’s and don’ts, vows, disciplines, etc. for the attainment of these three jewels, comprise the outer component of spiritual practice. The inner limb being eternal, changeless, independent and unaffected by anything on the outside cannot be reformed. To bring about any change there is considered as straying away from the path. However, it is necessary to bring changes in the external spiritual practices. When the practice of rituals becomes dull and mechanical, the Enlightened Ones advocate changes in the outer form of the sadhana to suit the given place, time and circumstances of the aspirants. Such revolutions have always been taking place. This is the tradition of the Enlightened Ones. This is what the Enlightened Ones have been doing and hence, they are traditionalists indeed. Following the orthodoxy is no doubt a tradition, but breaking the orthodoxy is also a tradition. Revolution is as old as orthodoxy. What you consider new is also old. However, those who insist merely on the outer form of dharma, view this as unconventional.

When the meaning of the fundamental path itself gets distorted, the Enlightened Ones initiate changes. Herein, the essence is not altered, but the false belief is corrected. The ignorant, driven by their concepts, term this compassionate gesture of a Master as profaneness and breaking away from the tradition. Whereas true aspirants, recognise it as the right understanding of the path, and behold the change as revolutionary.

As the teachings of the Enlightened One awaken aspirants, such teachings are considered a revolution, and such a spiritual mentor is considered to be a revolutionary. The focus of the Enlightened One does not stray from the main path even at the time He is bringing about changes necessary in the outer form of dharma based on the present state of society. Every change is made in accordance with the basic path of right faith, right knowledge and right conduct. If this were not so, it would be considered self-willed conduct. The revolution is merely in the outer form, with the aim of facilitating seekers to adhere to the fundamental path with ease. Should the focus change, it would be profaneness indeed.

Whenever an Enlightened Being expounds new means to overcome the lifeless practice of rituals and knowledge, the dull-witted ritualists and the so-called wise people feel that He is ‘modern’. Yes, He is modern, but only with respect to the outer form of dharma. As far as its inner form, He is traditional indeed.

Acceptance of revolution requires bravery, intelligence, a vision seeking truth and a yearning for liberation. Those who do not have these will keep holding on to the established practices. There is a convenience in holding on to the conventional methods – one need not think and take a decision. There is imitation there, and so it can be blindly followed. There is only unawareness in it and so it is fine even if one does not awaken. But Dharma is related to wakefulness, not unconsciousness; it is associated with contemplation, not blind faith; freshness not staleness. Belief without understanding shows prejudice.

Man, due to two main erroneous habits, remains bereft of the supreme benefit.

(1) Getting influenced by the crowd – The majority is right. Due to this belief, one does not reflect independently, but spontaneously accepts it as true. For example, someone said that number 13 is unlucky; and since many people believe this, he also accepts it. There is no proof of the truthfulness in this, yet, influenced by the crowd, this blind belief has become deeply ingrained in him. Due to this, there is a feeling of non-acceptance and dislike towards those who do not harbour the same belief. Thus, man contemplates with a prejudiced mind and ends up slandering the Enlightened Ones and fails to gain from them.

(2) Non-acceptance of the living and acceptance of those not present – There arises no suspicion about those who are not present, therefore, they are completely accepted. Whereas, for the living Masters, there is suspicion. Therefore, He is not accepted, or not accepted completely. This is because in the field of religion, people get encouraged to start believing doctrines without much contemplation; but this leads to no transformation. This does not happen in the presence of a living Master. He does not encourage blind faith. The Enlightened One propels a thinking process to cultivate faith. This thinking process seems like challenging the doctrines to the ignorant and hence he is unable to accept the living Master.

Due to such reasons, one is not able to accept the reforms brought about by the Enlightened One in the outer form of dharma. But, if he puts aside his obstinacy, and looks back at history, he will realise that the outer form of dharma has never remained the same. All revolutions become tradition, and no sooner does it become a tradition than a revolution begins to come about. Revolution is the first step towards the establishment of a tradition, and tradition is the final state of the revolution. When some Enlightened Being expounds, His teachings appear to be revolutionary. Within a short time, they become the tradition. As time passes, dullness creeps in and the need for a revolution arises again.

Revolution is like being born, and the one that is born must indeed die. It is not possible to save it from perishing. In all the religions of the world, we can observe such a happening – all traditions have indeed come about in the form of a revolution. Then, this revolution became well organised and systematic, and gradually, due to the joining of many, its pure form began to deteriorate. The lustre was lost. There was again a need for revolution.

One needs to recognise this fact and accept such Enlightened Beings like Param Krupalu Dev. True recognition of the Enlightened One leads to the path of liberation. With this, one gains the worthiness required to attain the goal and finally realises the True Self. The transmigration of the soul since time immemorial ceases and the sorrow of birth and death is completely annihilated. 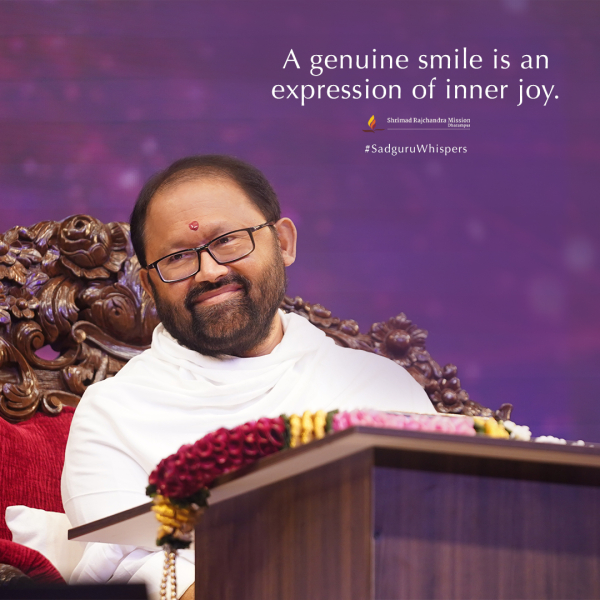 A genuine smile is an expression of inner joy. 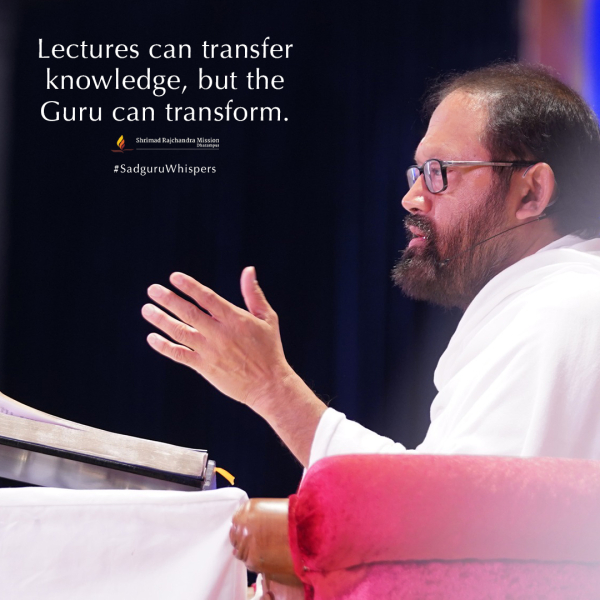 Lectures can transfer knowledge, but the Guru can transform. 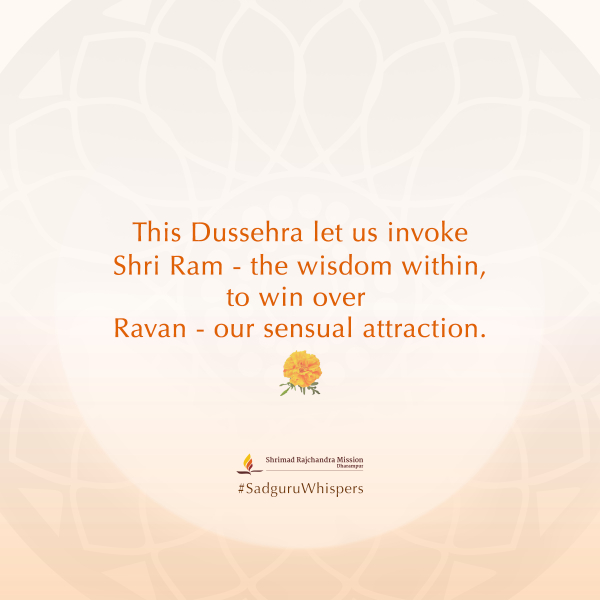 This Dussehra let us invoke Shri Ram - the wisdom within, to win over Ravan - our sensual attraction. 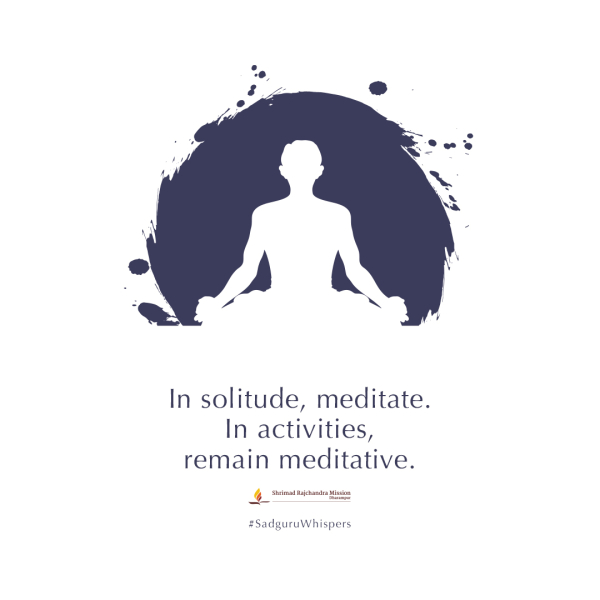 View All
#SadguruWhispers Lectures can transfer knowledge, but the Guru can transform.