The words of Param Krupalu Dev woven in Shri Atmasiddhi Shastra connect and uplift the seeker on the path of liberation. The power of His words makes the seeker give up his extrovert inclination and kindles an interest in inwardness. Living up to His teaching changes the direction and transforms the inner state of the seeker. His language is soothing and profound. Surely the subject matter is made interesting but nowhere has the depth and profundity been compromised to make it entertaining for the reader.

Param Krupalu Dev speaks from His experience and not imagination. Effortlessly arising from His supremely pious and pure heart and touched by His profound inner state, this composition has such immense power that the seeker is inevitably drawn towards the Self.

The truth expounded in Shri Atmasiddhi Shastra, when practiced with earnestness, clear purpose and great enthusiasm, brings complete inner transformation. The wrong vision since time immemorial gets corrected, the seeker gives up worldly inclinations, turns inward and attains peace, bliss and purity. In this way, this exposition becomes instrumental in taking an earnest seeker to an unprecedented inner state.

When Pujya Shri Lalluji Muni experienced this, he called Shri Atmasiddhi Shastra an unprecedented composition. The unprecedented-ness was not from the perspective of the truth, but because of the way the truth is rendered in it and how this expression of truth influenced him. The inner transformation that followed its study was unprecedented. Because of the unprecedented experience, his enthusiasm and devotion would be very high. He would go in the forest and bow down to each verse, reflect deeply on them and be meditative. Such spirit would remain constant in him.

Ecstasy and its Forms

Though the rapturous spirit of the devotee remains unbroken, it has two different forms. Either it may manifest externally as music, like Meera dancing with anklets, Pujya Shri Lalluji Muni bowing down and singing the glory of Param Krupalu Dev; or the taste of the inner bliss may just remain within.

The outer expression of the blissful spirit can not remain constant, because the body through which the spirit is expressed has its limitations. It would not have been possible for Meera to dance and Munishri to bow down for 24X7. Such outer expressions will come and go but the inner spirit doesn’t leave. The devotee remains ever immersed in love divine and the inner ecstasy remains unbroken.

Everyone around can see the outer expression and acknowledge the devotion and the divine rapture, but in the absence of its external expression it is difficult to appreciate the inner spiritedness. This can be recognised only by subtle vision and close association. Being in the constant remembrance of the divine, the outer world gets devalued and there is natural indifference and detachment for all that can hinder his devotion. This detachment is clearly the insignia, an evidence of devotion in the absence of external expression.

The fragrance of the one immersed in meditation can be smelt, the spirit can be heard, and the devotion can be felt if the vision is made subtle and focused. The one with extrovert vision feels that the devotee is at times spirited and at other times, not. However, once the spirit of the devotee comes, it does not leave. When it is not expressed externally, it can still be recognised as detachment.

Awareness of the Inner Sky

Transformation in a seeker begins with living in close association with the Enlightened One. He has no idea of being in bondage, tied with chains, held captive in the cage of delusion. This realisation dawns after seeing the liberated state of the Enlightened One. A bird may get all comforts in a cage, like timely food, protection from enemies etc., and even if the cage is made of gold and the owner is compassionate, it experiences no joy because it cannot fly freely in the open sky like the free birds. It lives a life of a slave. The comfort and security is at the cost of liberation.

As he continues to be in the close association of the Enlightened One, he realises that he too has wings that He flies with. Due to unawareness of his capacity to fly, he has remained in bondage since time immemorial. If he makes use of his wings now, he too can fly.

In the inner state, countenance, and actions of the Enlightened One, he can listen to and see the flapping of the wings, His freedom, His bliss, and comes to recognise His greatness. Like ice, his ego-identity starts melting. Wealth, family and power appear worthless to him. And the yearning for his true nature begins.

The seeker, like the caged bird, seeing the flying bird starts flapping his own wings and gradually begins to fly. His heart gets filled with joy and wonder, and overflows with the feelings of deep gratitude. He feels self-confident. He realises that the power of Guru’s grace is unparalleled; the dumb begin to talk, the lame climb the mountain, and the blind start seeing.

The seeker realizes that the cause of his unhappiness is ignorance of the real nature of the Self. His true nature is pure, consciousness, self-effulgent and abode of bliss; knowing and abiding in this nature alone can liberate him from all suffering and manifest supreme bliss. Faith in the Sadguru leads to faith in the Self.

He recognises the greatness of Guru-ajna and firmly resolves that truth can be realised only by following Guru-ajna. He experientially understands that as long as he remains in Guru-ajna, he will not get swayed from the truth. He follows Guru-ajna earnestly and gradually comes closer to experiencing his true nature; his life gets filled with the light of knowledge and fragrance of virtues.

Going close to a lamp, one gets light; going close to a flower, one gets fragrance; in the same way, going close to the Guru, one gets the light of knowledge and experiences the fragrance of virtues. This is called Satsang. Through Satsang, one clearly understands that focusing on his true nature is sure to result in his spiritual welfare. He realises that till he is focused outside, the moon and the stars, he would attain neither true knowledge nor bliss. Focusing on that which is close, as with the lamp and the flower, he will get what he is yearning for. By remaining in Guru-ajna, looking in the direction of the SeIf, he will experience supreme bliss. 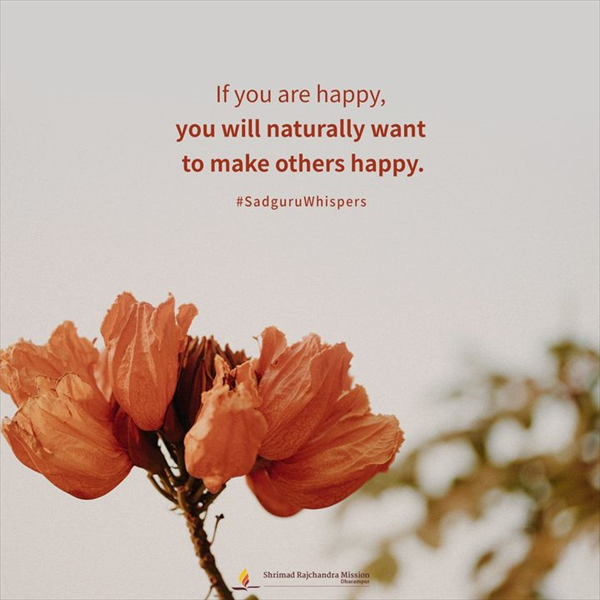 If you are happy, you will naturally want to make others happy. 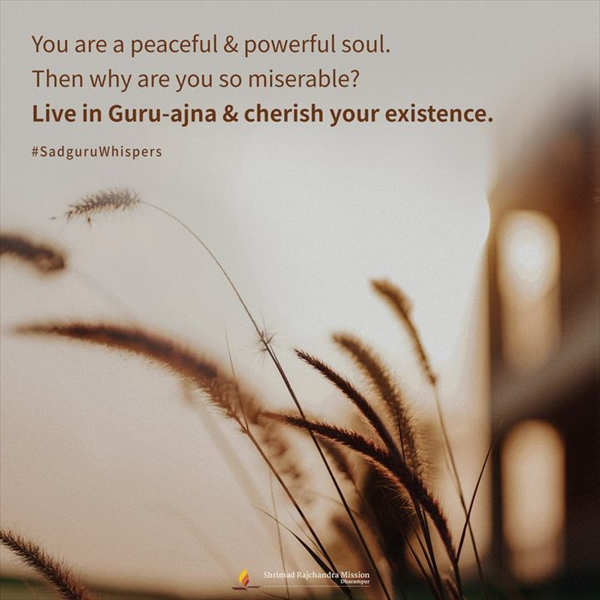 You are a peaceful & powerful soul. Then why are you so miserable? Live in Guru-ajna & cherish your existence. 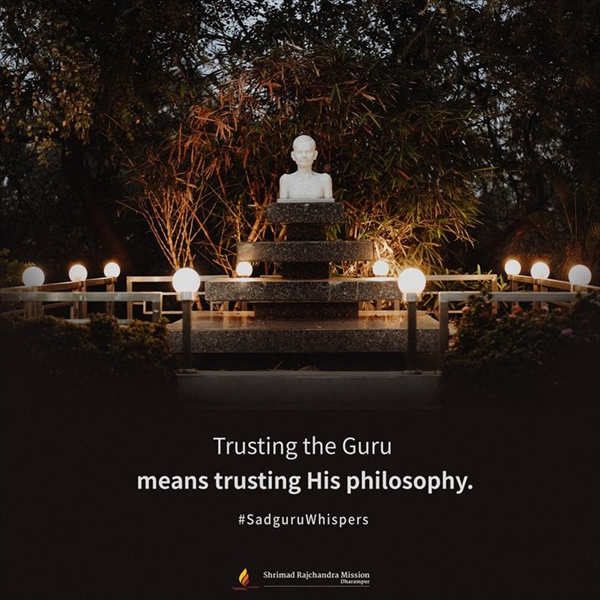 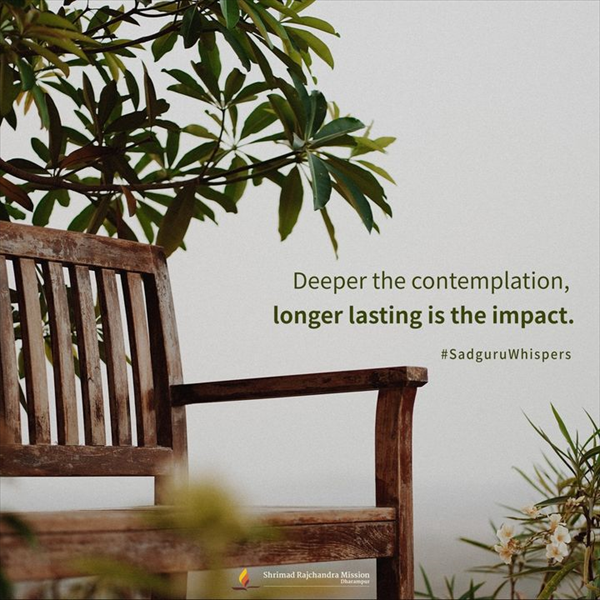 Deeper the contemplation, longer lasting is the impact.

View All
#SadguruWhispers You are a peaceful & powerful soul. Then why are you so miserable? Live in Guru-ajna & cherish your existence.