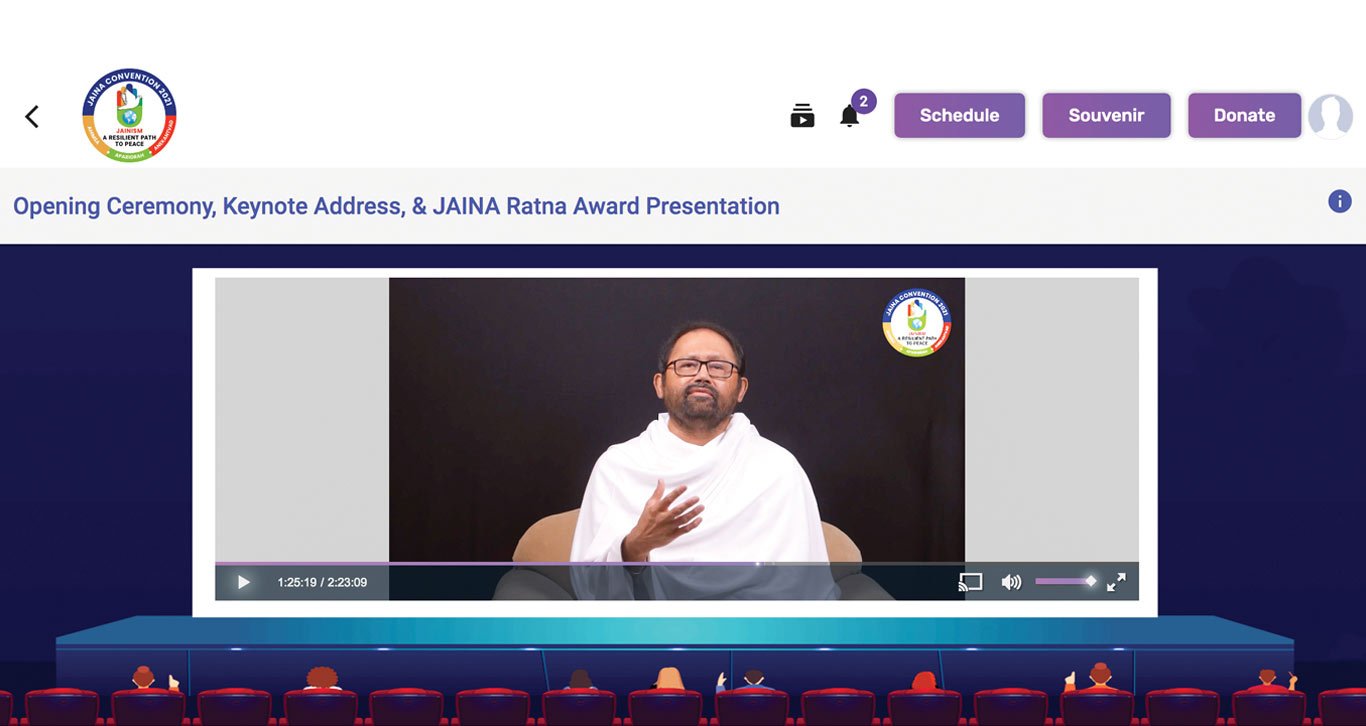 Pujya Gurudevshri Graces the Online JAINA Convention
JAINA held its 2021 Convention from July 1st to 6th. This premier event brings together thousands of members of the Jain Community from across the world. This year, the virtual event attracted an even larger audience.

Shrimad Rajchandra Mission Dharampur and JAINA have had a long association. The Mission’s active online participation in this year’s Convention was yet another gesture fortifying the bond.

Pujya Gurudevshri delivered the Keynote Address virtually at the Convention, on the topic ‘Ahimsa – A Loving State of Consciousness’. Pujya Gurudevshri commenced by stating that in a world gripped continually by fear, conflict and sorrow the only thing worthwhile and joyous is the Dharma of the Dispassionate One.

Quoting Bhagwan Mahavira, Pujya Gurudevshri said Ahimsa or non-violence is the ultimate Dharma. He further highlighted that normally Ahimsa is understood as not inflicting pain or killing others. However, it is in the intention to kill where violence thrives. Therefore, one needs to be highly aware of one’s intent, inclination and feelings and not focus on acts alone if one is to truly become non-violent. Another marvellous insight from Pujya Gurudevshri was that not only aversion but attachment too causes violence. One therefore needs to be aware the moment attachment arises and work on it.

He further explained that Ahimsa and Dharma are positive concepts. Ahimsa means love; a state where one has become so pure and content that one would not want to cause harm to others or oneself. He concluded the address by praying that may all be filled with true love, non-violence and become truly spiritual.

The JAINA opening ceremony also witnessed a short address by Atmarpit Nemiji where he congratulated JAINA for the magnanimous task it had accomplished by providing a global platform to sow and spread the Jain virtues in North America, fusing Indian heritage with American technology. He also commended the excellent work done by JAINA for India during the pandemic.

Shrimad Rajchandra Divinetouch conducted sessions virtually at the JAINA Kids Club. With the help of interesting presentations, fun games and spirited dances the sevaks explained various concepts of Jainism, which was very well received by the children.

Jivanarpit Avni Talsania, who holds a Masters of Science in Yoga and is a core team member of SRMD Yoga, conducted ‘Humble: Yoga for Beginners’ online. It was meant for all ages and culminated with a calming meditation for self-compassion and universal wellbeing.

Over 70 members from Los Angeles, San Diego, San Francisco Raj Parivar came together to participate in a vibrant and spirited dance dedication titled ‘Atmashuddhi no Avasar’ based on the song ‘Avsar Avyo Hath Anmol’. It signified that by the grace of Param Krupalu Dev and Pujya Gurudevshri the devotees should make the most of this priceless human birth.

The JAINA convention featured a state-of-the-art interactive Exhibition hall. Shrimad Rajchandra Mission Dharampur had an exclusive booth that educated attendees about the exemplary life of Param Krupalu Dev and Pujya Gurudevshri and also informed them about the spiritual, seva, youth and children activities of the Mission.

The Online JAINA Convention 2021 served as a commendable medium for the message of Param Krupalu Dev and Pujya Gurudevshri, as well as that of many saints and scholars, to reach the spirituality-seeking North American Jains, and to the world at large. 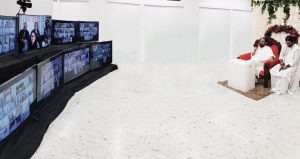 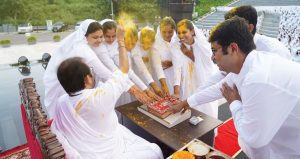 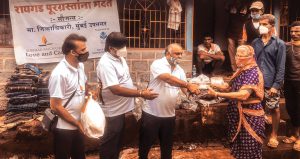 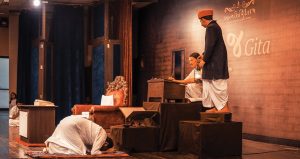