Skip to content
Home Wisdom Shrimadji in the Eyes of Gandhiji

Shrimadji in the Eyes of Gandhiji

It was Gandhiji’s personal interaction and correspondence through letters with Shrimadji that had a profound influence on his character. Presenting his expressions about Shrimadji.
The personal relationship of Shrimadji and his contemporary Mahatma Gandhiji, is a bright chapter not only in their personal lives, not only for the state of Gujarat, but for the cultural, political and spiritual history of the whole of India. Gandhiji's herculean and countrywide efforts in freeing the nation from slavery by fighting on the principles of non-violence and truth, resulting in the attainment of freedom – represent an unprecedented victory of non-violence, self-restraint and austerities in the history of mankind. It was his association with Shrimadji and the wise counsel provided by Him on the principles of truth and non-violence, which formed the cornerstone of this great man's life.

In his autobiography, the chapters on ‘Raychandbhai’, ‘Dharmik Manthan’, ‘Dharma-Nirikshan’ and ‘Brahmacharya’; and his other writings and lectures on Shrimadji reflect Gandhiji's faith in Him. Shri Revashanker Jagjivanbhai had requested Gandhiji to write a preface of the book, ‘Shrimad Rajchandra’, second edition, published in V.S. 1982, under the auspices of ‘Paramshrut Prabhavak Mandal’. Gandhiji accepted his request; completed the last chapter on some of the memoirs of Shrimadji that he had previously written in the Yervada jail, added other material to it, and prepared an article entitled, ‘Raychandbhaina Ketlak Smarano’. In this, he has heaped a lot of praise on Shrimadji. Presenting some excerpts:

I was introduced to Raychandbhai in July 1891, on the very day on which, returning from England, I landed in Bombay. At this time of the year the sea is stormy. The ship, therefore, had arrived late and it was already night. I stayed with Dr. Pranjivan Mehta, Barrister, now the well-known jeweller of Rangoon. Raychandbhai was his elder brother’s son-in-law. The doctor himself introduced me to him. On the same day I was also introduced to Jhaveri Revashanker Jagjivandas, another elder brother of his. The doctor introduced Raychandbhai as ‘a poet’, and added, “though a poet, he is in our business. He is a man of spiritual knowledge and a shatavadhani (One who can pay attention to a hundred things simultaneously)”. Someone suggested that I should utter a number of words in his presence, saying that no matter to what language they belonged he would repeat them in the same order in which I had uttered them. I could not believe this. I was a young man, had just returned from England, and was a little vain, too, of my knowledge of languages; in those days I was under the powerful spell of English. Having been to England made a man feel that he was heaven-born. I poured out all my store of knowledge, and first wrote out words from different languages – for how possibly could I afterwards remember them in their due order? I then read out the words. Raychandbhai repeated them slowly one after another and in the same order. I was pleased and astonished, and formed a high opinion about his memory. This was an excellent experience to break a little the binding spell of English on me.

The poet did not know English at all. At the time I am speaking of, he was not more than twenty-five. His study in the Gujarati school was not much either. And even then he possessed such a powerful memory and such knowledge, and was respected by everyone around him! I was all admiration. The power of memory is not sold in schools. Knowledge, too, can be acquired without going to school if one wants it – is keen on it – and one need not go to England or elsewhere to command respect, for virtue is always respected. I learned these truths on the very day I landed in Bombay. The acquaintance with the poet which began on this occasion grew over the years.


One rare feature of his writings is that he always set down what he had felt in his own experience. There is in them no trace of unreality. I have never read any line by him which was written to produce an effect on others.
He had always by his side a book on some religious subject and a notebook with blank pages. The latter he used for noting down any thoughts which occurred to him. Sometimes, it would be prose and sometimes poetry. The poem about the ‘supreme state’ must have been written in that manner.


Whatever he was doing at the moment, whether eating or resting or lying in bed, he was invariably disinterested towards things of the world. I never saw him being tempted by objects of pleasure or luxury in this world.

I watched his daily life respectfully, and at close quarters. He used to walk slowly, and the passer-by could see that he was absorbed in thought even while walking. There was a strange power in his eyes; they were extremely bright, and free from any sign of impatience or anxiety. They bespoke single- minded attention. The face was round, the lips thin, the nose neither pointed nor flat and the body of light build and medium size. The skin was dark. He looked an embodiment of peace. There was such sweetness in his voice that one simply wanted to go on listening to him. The face was smiling and cheerful; it shone with the light of inner joy. He had such ready command of language that I do not remember his ever pausing for a word to express his thoughts. I rarely saw him changing a word while writing a letter. And yet the reader would never feel that any thought was imperfectly expressed, or the construction of a sentence was defective or the choice of a word faulty.

These qualities can exist only in a man of self-control. A man cannot become free from attachments by making a show of being so. That state is a state of grace for the atman. Anyone who strives for it will discover that it may be won only after a ceaseless effort through many lives. One will discover, if one struggles to get rid of attachments, how difficult it is to succeed in the attempt. The Poet made me feel that this state of freedom from attachment was spontaneous to him. 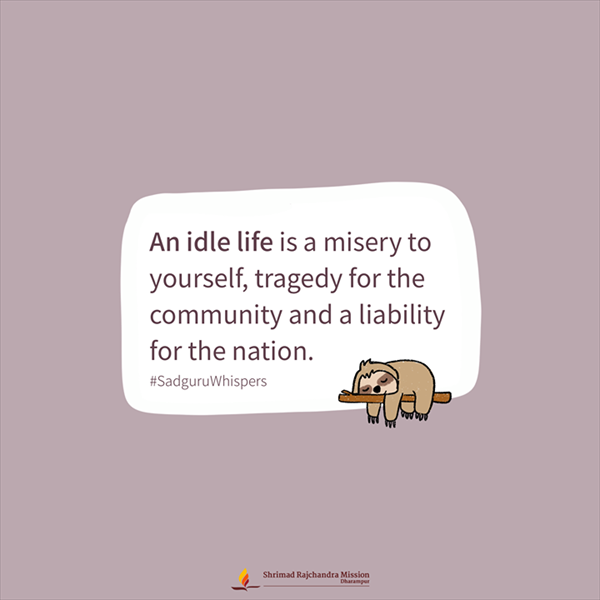 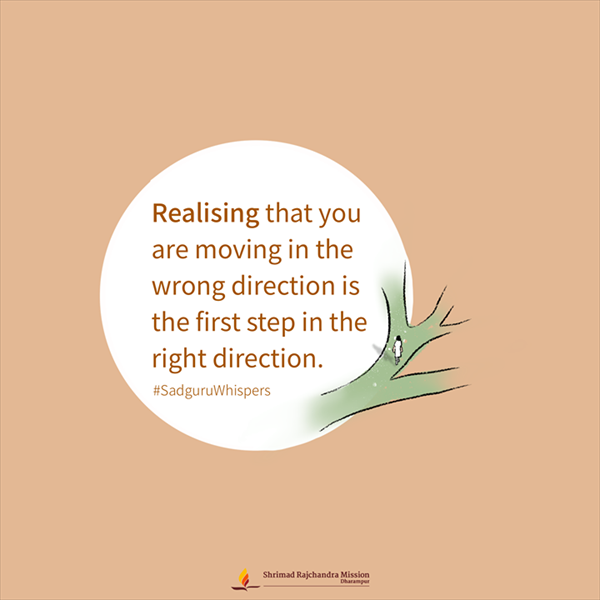 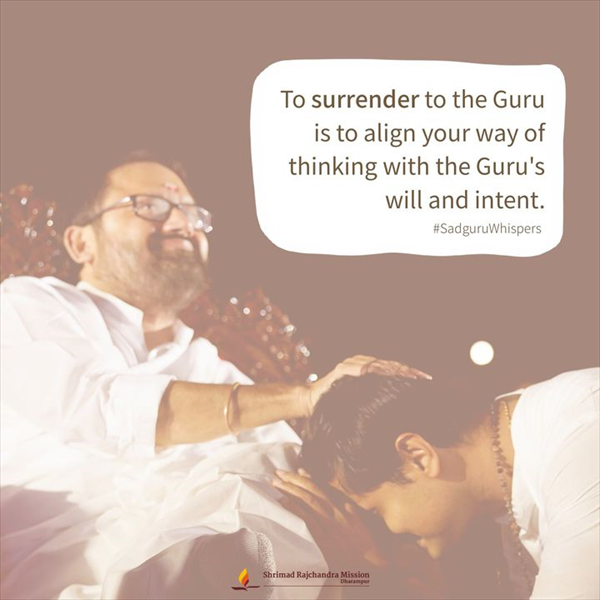 To surrender to the Guru is to align your way of thinking with the Guru's will and intent. 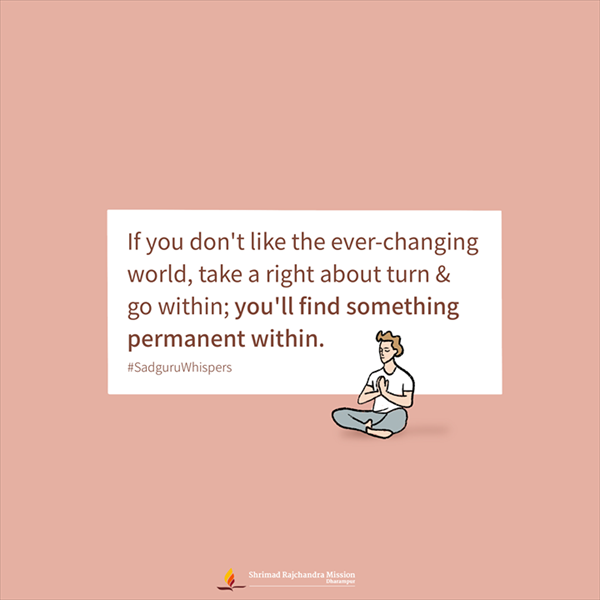 If you don't like the ever-changing world, take a right about turn & go within; you'll find something permanent within.

View All
#SadguruWhispers Realising that you are moving in the wrong direction is the first step in the right direction.